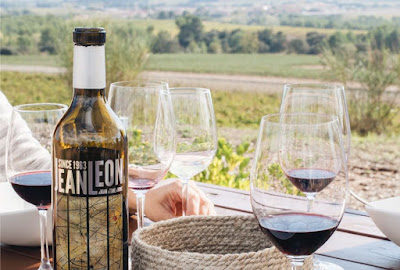 Four Wines from Spain's Jean León, based in Penedès, with Mireia Torres and Lucas GailhacJean León's back-story is that he emigrated from Spain to the USA in the 1940s, set up Hollywood’s La Scala restaurant with James Dean and returned to Spain in 1961 to make world-class wines from international varieties; in 1995, in failing health, he sold his estate to Miguel Torres to continue his legacy. 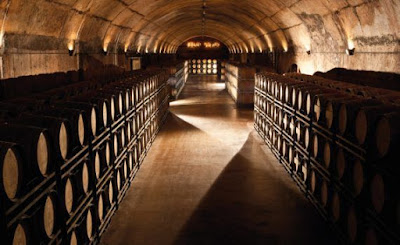 Picaresque details from his life include his real name of Ángel Ceferino Carrión Madrazo, a house fire that took the family from Santander to Barcelona, multiple attempts to stow away to the US from Le Havre, working as a New York taxi driver then starting his career as a restaurateur on the West Coast working for Frank Sinatra and going on to serve five Presidents of the USA.

A visionary with both huge ambitions and the relentless work ethic to back it up, he personifies the American Dream of the 1950s.

His winery is boutique, just 39ha are used for his single-vineyard wines, and is based in Penedès surrounded by mountains at an altitude of 300m. 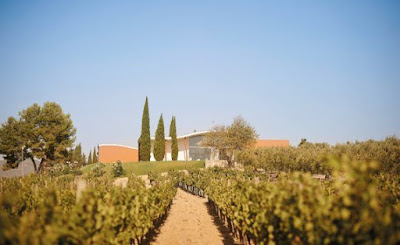 Penedès is a warm-climate area and this is evident in the wines; they are big and ripe, yet with a balancing freshness.

All the wines are named after milestones in Jean León's life:

- It was from Le Havre that he set sail to America

The wines are available at Wine Direct, and Vinvm. 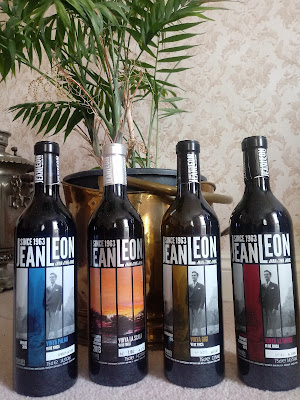 His charisma and discretion made Jean Leon a confidant to the stars, who embraced him as one of their own and trusted him with their unusual stories. Years later, when he had his own family, Jean Leon produced this organic wine in their honor.

One of Spain’s Chardonnay pioneers, Vinya Gigi was the first to undergo barrel fermentation. The wine originates in a small, exceptional 5-hectare vineyard planted in 1967. Jean Leon named the vineyard – and the wine it produces – after his daughter.

50% barrel-fermented with some lees aging and stirring, plus partial malo; aromatic and floral, with ripe pineapple and peach, some quince and honey, sweet spices and Mediterranean flowers. Intense, persistent and fresh, with a long, elegant mid-palate and a balanced, lush finish.

Match with meaty white fish in a creamy sauce, poultry or other white meat.

From stowaway and New York cab driver to one of Hollywood’s most successful restaurant owners and founder of his own namesake winery: Jean Leon’s life is the timeless tale of the American dream. Vinya Palau remembers Jean Leon’s origins and pays tribute to his hometown, Santander, the starting point for a life marked by extraordinary success.

This organic, limited-production varietal wine originates from the Vinya Palau vineyard. The small 10-hectare lot is home to Merlot vines planted in 1991.

Match with barbecue meats or game such as duck.

At the French port of Le Havre, Jean Leon stowed away on a ship bound for the US. He was soon discovered by a sailor who decided to keep his presence a secret. This Reserva wine is a tribute to an unspoken pact with a stranger who changed Jean Leon’s life forever.
Made from Cabernet Sauvignon and 15% of Cabernet Franc, this limited-production wine originates in an exceptional 16-hectare vineyard that shares the same name.
12 months in barrel, mostly French with a small amount of American oak; roasted peppers, black fruits and cassis, iodine, ripe red fruit; spices; toast with a concentration of soft tannins; elegant palate; long and persistent finish

Match with game, such as venison or boar, or aged cheese.

Vinya La Scala Cabernet Sauvignon Gran Reserva Single Vineyard, 2013
This limited-production Gran Reserva is only made from exceptional vintages. It has its origins in the Vinya La Scala vineyard, a small eight-hectare parcel planted in 1963. Considered the first Spanish wine made primarily from the Cabernet Sauvignon variety, Vinya La Scala was selected as the official wine for Ronald Reagan’s inauguration at the White House in 1981.
Its name is a tribute to the restaurant Jean Leon opened in Beverly Hills during Hollywood’s Golden Age. The label of every new vintage features the work of a renowned artist.
The 2013 vintage come alive with the colourful label painted by Gloria Muñoz, which shows the Penedès scenery, immortalizing a sunset in the vineyards where she evokes the land chosen by Jean Leon to make wines with individuality, personality and unique identity.
From an excellent vintage, 24 months' aging in French oak with a further 3 years in bottle before release; ripe dark fruit, spices, complex, mature roasted notes with sage and tobacco; aged gamey-leather and mushrooms, with a full-bodied, firm structure; long and persistent finish.
Very Good.
Match with red meat in spiced sauces, especially green peppercorn.