Views on Terroir in Burgundy: Sangouard-Guyot 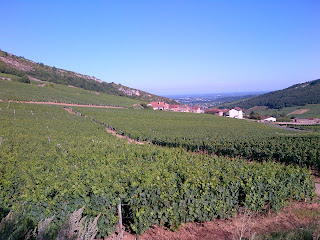 "It's the last building on the left as you leave the village" we are told; a few twists and turns up a steep hill later and with the fuel gauge range on the car plummeting, we pull up in front of Domaine Sangouard-Guyot in the Mâconnais village of Vergisson.

Winemaker Pierre-Emmanuel is waiting to greet us; he and I are both fluent - unfortunately, in different languages, so wife Catherine, who deals more with the business side of the winery, arrives shortly to tell us their story and translate as needed.

The domaine is an old stone building - no-one seems quite sure how old, but there is a stone with 1856 carved on which Pierre-Emmanuel explains originally came from a chimney breast.

With the rocky outcrops of Vergisson to the left and Solutre to the right, the hill unfolds down to the expansive plain below with mountains rising in the distance that Catherine confirms to be Switzerland; on a clear day, she explains, in the early morning you can see the sun rise behind Mont Blanc. I ask the children if they would like to get up at 6:30 the following day to see this - they wouldn't. 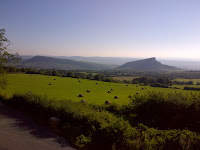 We are staying the night in the area to break up the return leg of a journey back from the South of France at a hotel just a few miles away in La Grange Du Bois. It turns out to be quite rustic - not in an expensive-shabby-chic sort of way, just genuinely rustic - but with magnificent, uninterrupted views of the two peaks and the hillside from our bedroom window.

Catherine starts the tour by pointing out the individual strips of vines they own - a few rows just in front of the house, a couple of sections on the peak of Vergisson, some more on the peak of Solutre, the rest all further afield and out of sight. It's all a legacy of the Napoleonic inheritance laws of Burgundy which divided up properties between offspring, leading to a complex patchwork of ever smaller sections of vineyard.

That complexity, the traditional unreliability of Pinot Noir as a grape variety and the general ubiquity of Chardonnay are among the factors that have historically made Burgundy something of a closed book to me - I knew the theory of course, but there is something about visiting the area, seeing the vineyards and meeting the wine-maker that brings it all to life and makes cohesive sense of what was previously just a list of disparate facts.

Ownership of a complete vineyard here is rare - each plot has vines belonging to different domaines and they have to mark out which are theirs to avoid confusion. Even so, one year, a hired-in picker managed to collect the grapes from a neighbour's vines and by the time it was realised, all Catherine could do was apologise.

As well as Catherine and Pierre-Emmanuel, the domaine has a permanent staff of just one with all other resource hired in is as needed, plus occasional help on Wednesday afternoons from their two girls who turn out to be the same age as our children. I ask our two if they would like to come over to Burgundy during harvest to help with the picking - they would not.

The domaine was run until 1997 by Pierre-Emmanuel's grandfather who sold all the wine in bulk to local co-ops and merchants for blending; change has been gradual - it was only last year that a new facility was built for bottling and storage of wines and even now, almost two thirds of the wine still has to be sold in bulk for pragmatic, financial reasons.

The new facility is on two levels, making use of the steeply sloping hillside - at the entry level are two large pneumatic presses with a gravity feed into settling tanks.

The fermentation room contains a range of different-shaped tanks of varying capacities, with the stainless steel ones all temperature controlled; Pierre-Emmanuel's favourites are the two squat, oval shaped tanks at the far end which he says impart the greatest amount of depth and leesiness to the wine.

There is a room full of oak barrels of various ages from new to around 12 years old - only their top cuvee is aged in new oak - and a storage and labelling room with capacity for 90,000 bottles. 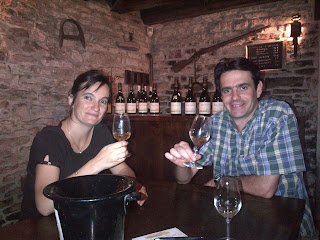 We move back outside and across to the tasting room on one the side of the house; a smallish stone-walled room, it has two antique guns on display. Pierre-Emmanuel explains that one is an old hunting rifle whilst the other was used in a war in the late C19th.

This prompts a discussion about how far back the family ownership of the domaine goes - there are documents to show ownership as far back as the revolution, but everything before then was destroyed in that turbulent time and remains a mystery.

We start with the basic Macon-Villages "Clos de la Bressande" 2011 (€7); it is fresh, straightfoward and well-made with good orchard fruit - the vineyards are located around 10km away.

The Macon Vergisson "La Roche" 2011 (€9) is just three weeks old and a little closed up - suffering from bottle-shock Catherine explains. It is aged in oak of 8-12 years and shows more complexity as a result.

The Saint-Veran "Au Brule" 2011 (€11) is from vines on the rock of Solutre which we can see around 5km away. Aged in oak of 5-8 years' age, it shows white stone fruit, pear, and a distinct white-peppery spice.

The Pouilly-Fuisse "Authentique" 2011 (€12) is from the top of the peak of Vergisson and more mineral as a result; the nose is somewhat closed and Catherine explains it needs more time in bottle to open up. Unlike the oak-aged wines, this one, aged in tanks, shows no spiciness at all.

The Pouilly-Fuisse "Ancestral" 2011 (€14) is from grapes grown in the village of Vergisson on a mix of clay (for roundedness) and chalk (for minerality). It has a full, leesy toastiness, with good structure and persistence. Still young, it will improve for several more years.

The Pouilly-Fuisse "Quintessence" 2011 (€16) is from vines on the top of the peak of Vergisson, just a few hundred metres away - aged in oak barrels of no more than three years' age, it has a toasty, spicy creaminess and excellent palate length. Again, it is only recently bottled and Pierre-Emmanuel suggests that it needs at least a further three months' age to show properly.

Even so, this is my favourite wine of all - inevitably the most expensive, not least due to the new oak, but a relative bargain at €16. I buy two bottles and make a mental note to stash them away for the rest of this year at least.

The wines all have various awards and scores - I'm somewhat intrigued by one having an IWSC Gold and a score from Gault & Millau of 15/20 which in my mind means "workman-like".

Catherine explains, however, that the French mark wines using the same approach as my old grammar school physics teacher - 17 is in practice the highest mark given so a 15 actually means "Very good indeed" and is equivalent to 18.5 to those of us more accustomed to Anglo-Saxon gradings.

We have a final chat about business generally, the difficulty of selling wine, especially Chardonnay, into the UK these days ("ABC - Anything But Chardonnay", says Pierre-Emmanuel with a wry smile) and then it's time to say our thank-yous, au revoirs and head off.

All the wines were good and well-made and, at the cellar-door prices quoted, excellent value indeed.

Sadly, neither Sangouard-Guyot nor Patrimoine des Terroirs has distribution in the UK yet.

Hopefully, it won't be too long before all that changes, but if you find yourself in or near Vergisson, I do recommend that you visit Catherine and Pierre-Emmanuel and buy some of the Quintessence.