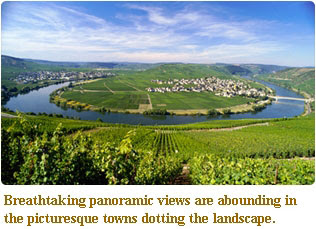 I recently went to a tasting of a baker's dozen of  aged Mosel Rieslings at Cambridge Wine Merchants as a guest of owner, Hal Wilson.

It had been planned originally as a tasting just for staff, but was subsequently opened up to assorted trade, scribblers like myself and friends in the know.

Given this, it was quite relaxed with no formal tutoring, just CWM's Germany expert, Matt Boucher, on hand to answer any questions.

My introduction to Riesling - at a time when Chardonnay was everyone's white wine of choice - came via Austria where the style is generally drier and riper; Austria has its own historic reasons for this style and has successfully re-invented itself as a premier wine nation.

By contrast, Mosel Rieslings inhabit pretty much the same space as sherry - that is a great wine, once considered world-class, that is now deeply unfashionable not least due to the various poor-quality cheap versions seen in this country.

To extend the comparison, they are also perhaps something of an acquired taste given that they are quite unlike anything else, are great value due to being underappreciated and in dire need of a revival.

In the case of sherry, as I have written elsewhere, that is already starting to happen as Spain rediscovers its inner cool.

However, whilst Germany may be many things, cool is not one of them and there is no sign of a Mosel Riesling revival on the horizon of popular consciousness.

That's not to say that Germany does not have elements of cool - reunified Berlin is vibrant and buzzy, the Bauhaus style still feels edgy today and the Beetle camper van is an icon not just for hippy travellers and surfer dudes.

But in the popular imagination, Germany is a land of industrial Krautrock, of solidly-made consumer goods and patrician, Hanseatic cities of beer and sausages - not a place of meandering river valleys with steep slatey terraces producing crystal clear, thoughtful wines of immense aging potential.

As a result, whilst none of these wines was exactly cheap in supermarket terms, there was a 25 year-old wine for under a tenner and even the most expensive maxed out at a few pennies over £15.

To me, conventional wisdom is to taste young wines before old, but as Matt Boucher pointed out the older wines are more nuanced and secondary whose subtlety can be harder to discern after a younger, more obviously primary, wine.

As a result, I started with the older wines in each category of ripeness and moved forward in time to the younger ones.

German wine labelling is based not on geography as the French AOC or grape variety as adopted by the New World, but on the ripeness of the grapes themselves with Kabinett being the driest style, before moving on to Spaetlese and Auslese and thence to higher degrees of sweetness.

The first wine, a Carl Schmitt-Wagner from 1986, was the oldest of the night - the grapes were picked and fermented a quarter century ago.

Whilst it still had good acidity, it felt a little tired and underwhelming and, for me, was more of interest as a museum piece than as a wine in its own right.

The next, a Werner Mueller from 1997, was a QbA - a grade lower which allows chaptalization (addition of sugar) - and did not have the complexity of the other QmP wines.

The best of the Kabinett wines was a 2008 Feinherb (semi-dry) from Johann Peter Reinert - at this youthful stage it is more primary with up-front juicy, zesty acidity and a deliciously ripe, mouthfilling flavour of boiled lemon sweets.

Not for the first time in the evening, I found myself agreeing with the judges, as this one has a Silver medal.

Next a flight of Spaetlese wines: the 1988 Carl Schmitt-Wagner was a golden colour, with surprisingly youthful, lively, zippy acidity and an integrated, rounded feel; some sweetness mid-palate but a dry finish. This was very good and had a gold medal.

A Werner Mueller from 1989 showed a little more age, with a rounded fatness and hints of lanolin with a long, dry finish. Again, a good wine - with a silver medal this time.

A more-youthful Gunther Fehres from 2002 was fresh and lime-appley, but for me the sweetness dominated a little.

A 2002 from Carl Schmitt-Wagner was rich and sweet with good tropical acidity.

A 2004 from Johann Peter Reinert had all the mouthfilling, zippy, boiled lemon sweets of his Kabinett, but with everything turned up a little.

This really was a superb wine and whilst £13 might seem a lot for an old, unfashionable, off-dry German wine, it is something of a bargain at the price for the age, quality, longevity and uniqueness that it represents.

Moving on to the Auslese wines, a 1985 from Gunther Fehres felt astonishingly youthful and fresh for its quarter century of age.

A 1994 from Werner Mueller had hints of aged Riesling kerosene on the nose, an a lovely mouthfilling barley sugar palate with a complex sweet and sour finish. It has a bronze medal and was the most expensive wine of the evening - at £15.25.

A wine from the same year, 1994, from Carl Schmitt-Wagner had a little more sweetness, a little less zip and felt like a slightly lesser version of the previous wine.

A 2002 from Johann Peter Reinert was rich, sweet and intense, almost in a BA style.

Finally, a 2003, also from Johann Peter Reinert had lots of ripe juicy pears, pineapple acidity and a sweet-yet-sour finish.

Fashion in wine is a funny thing - at the time of writing the prices for 2010 Bordeaux en primeur are being released with massive price jumps fuelled, many say, by speculation and Asian billionaires' desire for wine as a gift-giving status symbol.

At the same time, here are some superb wines which fashion has left behind, many of which are sitting in the winemaker's cellar looking for a buyer at (almost) any price.

Who knows whether there will ever be a German Mosel Riesling revival with a corresponding leap in prices to Bordeaux levels, but for now, whilst these wines are seriously undervalued, surely it's worth at least trying a few of these wines to say you have had them at a time when they were almost pocket-money wines.

If you try just one of these wines, I recommend the Riesling Spaetlese 2004 Wiltinger Schlangengraben from Weingut Peter Johann Reinart, £12.90 at Cambridge Wine Merchants.

German wines, it is said, are made for the garden more than the dining table, but for food, match with smoked salmon or goose-liver pate.

I also recommend the following too:

QmP the highest classification with six sub-divisions depending on grape ripeness: