Some light relief at half-term: The Plough at Coton‏ 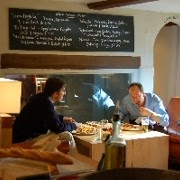 It was half-term recently and my turn to look after the kids. With only a little encouragement from me, my daughter decided she would like to do a bike ride and have a pub lunch somewhere.

As I have mentioned before, the quality of eating establishments in central Cambridge is not generally that great as many have only the tourist trade to consider. Moreover, whilst central Cambridge is an undeniably lovely place with its historic colleges, pedestrianised medieval street layout, the river Cam and the backs, the surrounding countryside is rather less impressive. So it was something of a challenge to think of a scenic route of 10-15 miles, suitable for a young cyclist, going via a decent country pub.

In the end, we started at Castle Mound, the highest point in the city with views of various chapels and rooftops, then wound our way between the colleges and along the backs to Grantchester Meadows and on to Grantchester itself before taking a minor road up to Coton about three miles west of Cambridge where we stopped at The Plough.

The Plough had been on my radar for a while as a gastropub worth visiting, but somehow we had never got round to it - any trips west of Cambridge have generally been to the excellent Three Horseshoes in nearby Madingley.

Set more or less in the centre of Coton, The Plough has that typical gastropub look of a cosy olde worlde exterior contrasting with a smart, modern interior. As that day it happened to be not only not raining, but also rather hot in fact, we decided to sit under an umbrella outside at the back.

I went for the three-course set lunch, whilst my daughter ordered from the children's menu. The food was proper gastropub-style, that is to say traditional pub food, well-made and presented, with perhaps the odd twist here and there, but not overly fancy restaurant food that happens to be served in a pub setting.

My starter of duck and black pudding terrine was served with slices of baguette and some dressed salad leaves and the waiting staff obligingly brought my daughter's fish and chips at the same time so that she did not have to sit and wait for her food.

My main, when it arrived, was a deliciously buttery piece of cod, lightly cooked to perfection and served on roasted peppers with a manchego crust and tapenade - a paste of black olives. At home, I would not be brave enough to try and mix the heavy salty flavours of tapenade with cheese and cod for fear of overwhelming the subtlety of the fish, but this worked really well, especially with the sweetness of the peppers.

My daughter's fish and chips were equally well made, with light crispy batter, succulent fresh fish and proper fat chips perfectly cooked - I can say this with authority having tried more than a few myself, much to her annoyance.

To finish, we had both chosen the same thing - chocolate brownie with ice-cream. Sadly, I was informed, their supplies only ran to a child's portion, so I re-ordered a cheesecake with amaretto, chocolate chips and raspberry topping. It was due to be served with clotted cream ice-cream (the main reason I had ordered it, to be honest) but actually came with a small saucer of double cream. I overcame my mild disappointment at this by pouring the cream over the cheesecake and also trying some of my daughter's ice-cream and brownie sundae which was lovely - the brownie soft and moist, the rich home-made ice-cream flecked with dots of vanilla.

My cheesecake was also delicious - I am not sure I could discern any Amaretto in it and the chocolate chips did not seem to add much to it, but these were minor points.

There is a large garden at the back of the pub with additional seating, some trees and play equipment for children, so my daughter went off to try these out whilst I finished off my beer - a lovely pint of Adnams bitter - before a gentle ride back into Cambridge, again via Grantchester.

Having finally visited The Plough, I now don't know why we haven't been there before; we will certainly be back soon.

Our approximate route can be found on Multimap directions - Cambridge to Coton via Grantchester: http://www.multimap.com/directions/