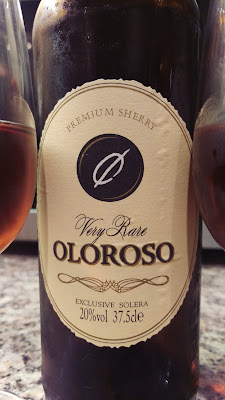 A heavily marked-down M&S dark sherry, made by Lustau

Lovely on a summer's day

At a summer garden party, a beer-drinking friend-of-a-friend observed that that every time we bump into each other socially, I seem to be drinking sherry.

Why sherry? he asked.

The obvious answer is of course: why not? But I felt something more considered was needed.

Establishing that he did not really want chapter-and-verse on sherry production, but simply a short list of reasons, I gave him this:

- sherry has very high acidity, so it is very refreshing

- it has no primary fruit flavours, so is highly versatile

- it is fortified to a higher alcohol level, so can stand up to foods

- it is aged for years in soleras so is complex, harmonious and mellow

For food matching, just go by the colour:

- paler sherries match with lighter foods, such as olives, bread and oil and manchego

If you want to do the food matching properly, the mantra is:

- If it flies, Amontillado

- If it runs, serve Oloroso.

In my case, I had brought along a half-bottle of M&S VORS Oloroso. It had been marked down to under £2 at a local M&S branch so I had picked up as many as I could physically carry, stuffing them in coat and trouser pockets.

It is fresh enough for an aperitif, especially well-chilled, but comes into its own with some slightly charred barbecue foods, such as burgers.

At home, match it with a starter of roasted almonds and toasted ciabatta with olive oil, followed by a griddled steak.

*****
The website sherrynotes give the following information on oloroso
Oloroso is aged in the absence of flor, in an oxidative way and starts from a selection of heavier, more full-structured musts than a Fino or Manzanilla (sometimes a second pressing of grapes).
After fermentation the young wines are evaluated and the ones with a thicker body will be destined for maturation as Oloroso sherry. To create an Oloroso the base wine will be fortified to 17 or 18 degrees which makes it impossible for flor yeasts to survive in these casks.
Due to evaporation known as merma (about 3-5% in volume each year), the resulting Oloroso will grow more concentrated to around 20-22 degrees.
Oloroso means fragrant and the best examples will display dried fruits, leather, polished wood and exotic spices; nutty aromas (especially walnuts), combined with polished / balsamic notes, subtle dried fruits, toasted hints, tobacco and autumn aromas. There are noticeable spicy notes in older examples. Often there are also subtle meaty hints, truffle and leather.
Though naturally dry, the relatively high strength and full body of an Oloroso (caused by glycerol) will give it an impression of roundness and even sweetness.
It may be lightly sweetened by adding a bit of Pedro Ximénez (Amoroso or Abocado sherry), but this practice is much rarer than it once was.
The classic pairing for an Oloroso would be red meat and game, but it will also be lovely with well-aged cheese. It is served around 12-16°C.