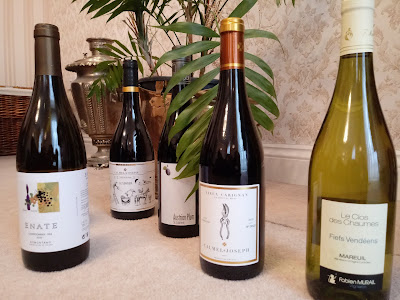 I don't generally do politics here; I leave that for conversations around the watercooler or over the dinner table.

But it is impossible to talk about Daniel Lambert Wines without mentioning the eponymous owner's recent campaign to raise awareness of the additional red tape faced by wine importers since Brexit.

Like science, The Virus and Marcus Rashford, Daniel Lambert can be credited with pretty much single-handedly forcing the UK government into one of its regular U-turns. In his case it involved an obscure but costly and pointless bureaucratic document called the Vi-1.

Take away the technical details and you can read this as just another example of the lie that was Brexit coming to light. Or you can see one man's struggle on  behalf of an entire sector for common sense and pragmatism to prevail over simplistic, jingoistic state-sponsored gaslightling.

Opinionated and not afraid to speak truth to power, Daniel is a man after my own heart.

He also sells some superb wines.

I know this because he imports a Calmel and Joseph Languedoc Malbec that I liked a lot.

I discovered that that wine was not merely a fluke when I subsequently tasted my way round his portfolio in London, just prior to lockdown.

As I noted at the time, there was nothing I didn't like; all the wines were at least Good, and many were much better than that (David Kermode's take is here).

After a twitter exchange, Daniel sent me a selection of his wines to try. I started with a Spanish Chardonnay and an Austrian red.

An area in the foothills of the Pyrenees, Jancis Robinson describes Somontano as "another Spanish wine region worthy of international attention". More specifically, she characterises it as a small and growing region, potentially one of Spain's most exciting, even if much of its produce tends to be fashioned in the image of international classics. She singles out producer Enate, saying that they make some fine reds and whites from imported grape varieties.

Tasted blind, you'd be forgiven for having no idea where this wine comes from; it has a warm-climate topicality and breadth with a European complexity and elegance. It hints at the perfumed richness of Alsace with the waxiness of the Rhône.

Floral and aromatic with tropical citrus fruits and toasty leesiness; pineapple, melon and passionfruit with fennel, ginger and warming sweet spices; savoury, leesy and waxy with just enough freshness to hold everything together. Very clean, pure and long.

Match with rich, Alsace-style dishes such as pork with creamy sauce or mature hard cheeses.

Austrian whites were my first love, but I am a more recent convert to the country's reds. Where the whites are austere and structured, the reds are generally delicate and juicy. Think Chablis vs Beaujolais.

St Laurent is a signature Austrian red grape along with the more well-known Blaufraenkisch; while both grapes are Pinot-esque, this St Laurent is more Gamay than Burgundian.

Dark purple with cherry and custard aromas; juicy and spicy with black cherries and dark-plummy fruit, pencil shavings, inkiness and spice with some florality; juicy and fresh with a gentle firmness and good savoury underpinnings.

Fresh and versatile, an easy quaffer or picnic wine with the freshness for tuna tartare, mixed anti-pasti or roast chicken.