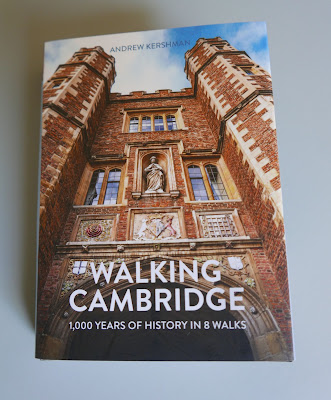 A book of eight walking tours around Cambridge

I have made Cambridge my home for the last twenty years and explored it with my wife, children relatives and a succession of visitors.

It's not a big city (that's actually one of the things I most like about it) so I thought there was little left to learn. This Walking Cambridge guide, however, still provides plenty of history to explore.

My go-to one-liners about Cambridge are:

- it does not have all that much to see, but what it does have is world-class
- Cambridge is basically a university and a hospital with a small, fenland market town wedged in between

A key historic distinction in Cambridge is between "town" vs "gown"; it's a sad truism that the history of urban Cambridge in no way compares with the history of academic Cambridge.
You could also add a newer, third category that has emerged only in recent years - of which I am one. London-commuters are those Cambridge residents who are neither "gown" nor "town" and in many ways have the least connection with the city.
For me, this was what I most enjoyed about Walking Cambridge; not so much the well-documented touristy stuff that I first discovered on moving here, but the more obscure local history that gives personality and depth to the streets I walk along to take my kids to school or got to the shops.

However, any visit to Cambridge necessarily starts with the academic side of the city centre; the winding cobbled streets, the river, the Backs and the first walk does exactly that, starting outside the great gate of St John's, covering much of the Backs and ending at Great St Mary's.
But Cambridge also has a history as a city; so whilst the University is what non-Cantabridgians first think of when they hear the name "Cambridge", those of us that actually live there also exist in the physical space of Cambridge as well as in its intellectual and conceptual aura.

Appropriately, then, of the eight walks in the guidebook, only one focuses solely on the world-famous college part of town; the remainder dive deeper beyond the well-trodden tourists paths and, in the process, tell more of the history of Cambridge as a city. 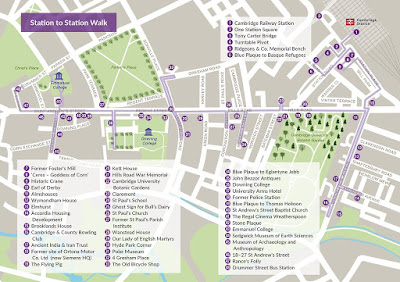 So, the way you might use this book depends on your relationship with Cambridge:
- if you have not previously visited the city, then start with the University Walk for its history and the Castle Walk for its views
- if you already know the well-trodden tourist areas of Cambridge, start with one of the suburban walks: the Station to Station Walk and Mill Road To Romsey Walk both take in my part of south-central Cambridge and include almshouses, the Kett and Foster families and the David Parr House.

Author Andrew Kershman describes being inspired to walk the streets of Cambridge, spotting unusual things and finding out the stories behind them, by the view from the tower of Great St Mary's in the centre of Cambridge and, having finished the last walk, "ascending the those same 123 narrow steps and looking down to recognise Senate House, the path from Caius leading to St John's and to the south, the road to Trumpington, passing the treasure trove of the Fitzwilliam Museum." 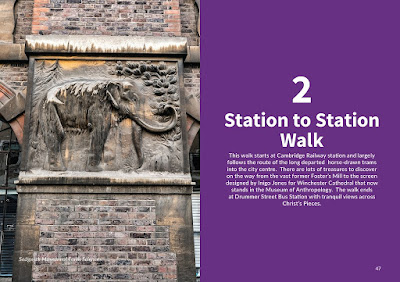 The guide itself advises:
- Walk along pavements embedded with flowers, discover how John Hodson rose from a college servant to become a rich man, only to lose it all in a famous scandal, and find a monument erected by the deposed prince of Siam in memory of his faithful pooch.
These walks will not only take you through ancient college cloisters to reveal Cambridge’s most famous sights, but also lead you far from the well-trodden tourist path, bringing to life long-forgotten voices and telling some surprising tales.