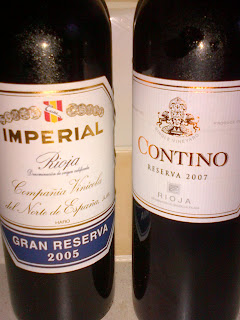 A review of two aged Riojas from CVNE

There are various signs of becoming a wine geek - or well-educated enthusiast; a fondness for Riesling and sherry is one, as is a bite from the infamous Pinot-bug.

The one that seems to get mentioned least, however, but which really sorts the uber-geeks from the mere wannabees, is a love of aged wines.

As wine ages, it gains something - a rounded mellowness, complexity and decaying, hedonistic aromas - that nothing else quite has. Rather like Mick Jagger performing Jumpin' Jack Flash on stage in his 60s, it will still have the fire and energy of its young-turk youth, but also possess a mellower self assurance and sophistication.

Bordeaux is perhaps the most well-known wine for aging, but Rioja can be a better-value alternative to the upper levels of the crus classes - Victor Urrutia, CEO of CVNE says of aging Rioja "I think Rioja reaches full maturity much quicker than Bordeaux, but has the virtue of staying on its plateau for a very long time."

These two wines are both approachable now, yet have the stuffing to keep improving for a few more years at least.

Both wines provided for review; the 2004 Imperial (my review here) was named Wine Spectator's wine of 2013.