Now in its fourth year, the launch of Tio Pepe's En Rama bottling for 2013 was marked by a preview tasting and dinner the night before at Hispania restaurant with winemaker Antonio Flores.

For the uninitiated, En Rama is a limited edition, unfined, unfiltered fino, bottled in the spring when the flor is at its thickest; the sherry is cleared naturally and is as close as you can get to a barrel sample without actually visiting the winery.

Darker in colour than a standard fino, it has a much stronger, more concentrated and intense flavour.

It is also more of a living product and so has a much shorter shelf life; drinking is recommended within three months of bottling date.

En Rama was launched for the UK and local markets originally, but is now gaining popularity across other countries.

The formal "release date" and rush to get it from winery to consumer as quickly as possible has a whiff of the potential for Beaujolais nouveau-style gimmickery if taken too far, but the underlying reasons for bottling only at a certain time and getting it to market quickly are based on sound practicalities.

The story of the 2013 release is that Sr. Flores initially selected 100 casks in late 2012 with the potential to become En Rama, then whittled it down to 67 for final bottling. 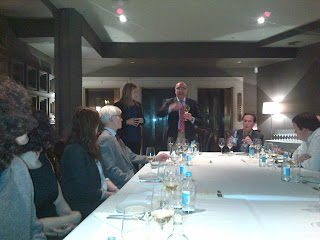 The barrels come from two very old soleras: Constancia and Rebollo (a foundation solera). Saca - the drawing off of some of the wine from the barrel - started on 1st April with the wine bottled on 8th April.

Antonio Flores describes En Rama as something magical, "life in a glass".

We started the dinner with some elegant tapas and a crisp Tio Pepe Fino.

Tio Pepe En Rama
Fino sherry is a perfect match for simple tapas and the savouriness and complexity of the En Rama matched with the sweet mellow jamon, but also stood up to the fat, crispy asparagus.

La Miranda de Secastilla Garnacha Blanca 2010
Made from previously neglected, 60 year-old bush vines in the cool hills of Somontano, this had a Riesling-esque nose with a hint of old oak.

On the palate, the acidity is poised precise and linear, with elegant aromatics and a long savoury palate. I thought this a really lovely wine, somewhat Austrian in style.

Matarromera Crianza 2009
A Tempranillo from Riberia del Duero, this had lots of ripe bramble fruit and peppery spice. It is a very elegant and balanced wine with a velvety texture, perfectly ripe tannins and a long savouriness and a touch of grip on the finish.

Whilst both the wine and the food were lovely, for me the match here did not quite work - the gently slow-roasted meat needed an older, less-primary wine. Or the wine needed meat that had been a little more browned.

Matusalem Oloroso
Matusalem is a blend of oloroso with 25% PX aged for 30 years. The two wines spend 10 years in separate barrels and a further 20 years in barrel together once blended.

Aromas of sweet American oak, varnish and antique shop give way to roasted nuts, figs and raisins. Sweet, complex and long, it has a savoury bite.

Brandy Lepanto
The brandy is made from Palomino grapes, double-distilled in two alembics from Cognac and then aged for 12 years in old Tio Pepe barrels at 60% alcohol, before bottling at 36%.

An amber colour in the glass, it is fine and elegant. On the nose and palate, the attractive non-alcoholic elements of cooked mixed fruit dominate; beautifully smooth and mellow.

As Antonio noted, the only thing that could have enhanced this round off to the meal was a cigar. 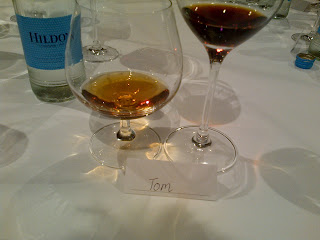 Tio Pepe En Rama is available in limited quantities at £14.99 from:

I attended as a guest of Tio Pepe.