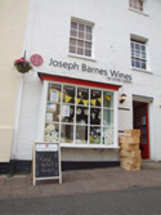 The little market town of Saffron Walden defies the image of a stereotypical urban Essex - it has no ring road around which boy racers drive their modified hatchbacks with blaringly loud music emanating from open windows and no hoards of bubbly peroxide blondes in white stilettos.

Rather, it is a quiet, genteel sort of place with an impressive 15th century church atop a hill (yes, rolling hills - another stereotype challenged) with timbered buildings and narrow streets around a quaint market square.

It is a place of old money which is also proving popular for London professionals of a certain age who want somewhere green and pleasant to bring up children with a Waitrose and good train links into the city.

So, idyllic and practical, then.

Another staple of the sophisticated, middle class lifestyle is a independent wine merchant - ideally an effortlessly cool one in a listed building with stripped wooden floorboards, soft, noodling jazz playing in the background and an affable patron.

We have several of these already in Cambridge so when Charles Hardcastle decided to move back from France to the UK, he opted for somewhere that had all the positives of my adoptive home city without the same density of independent wine merchants.

Of course, there was some local competition in Saffron Walden - a Waitrose and a branch of Adnams - but the local population is around 15,000, meaning that one more still left 5,000 people for each.

One hot sunny day recently, I made the short drive down to Saffron Walden from Cambridge to meet Charles, chat about his shop and try a few of his wines.

Finding the shop was no mean feat in itself as Saffron Walden still has, like Cambridge, a street layout from an earlier era and Joseph Barnes Wines is somewhat tucked away on one of the narrow side streets away from the central market square.

However, once inside, you suddenly feel as if you have taken on a touch of the shop's stripped-down, unpretentious effortless chic and you could be in an edgy part of Soho rather than a sleepy, gentrified market town.

Sitting up to a small bar at the window, Charles talked me through his background in hospitality - including stints in Michelin-starred restaurants in Paris, Munich and Zurich - to wine stock-taking which involved commuting to London from the south of France to his decision to return to the UK and set up in business.

Having lived in the Languedoc for several years, he pretty much had all the contacts he needed to start a shop without needing to go via the big importers.

This gave him both access to more interesting and unusual wines and a pricing advantage.

He also brought with him an interest in all things natural, organic and biodynamic.

I must confess to a certain cynicism about whether an adherence to phases of the moon can really improve the quality of a wine, so I merely nodded politely at this point - and then noted that the biodynamic wine was indeed very good.

As we talked through the wines, Charles explained that what he enjoys most is telling stories. And this is clearly what today's punter wants - not the dry, technical, scientific stuff about soil-types or vinification methods, but the human-interest story about the producer, his passion for winemaking and the provenance of the wine itself.

We are used to seeing details of the provenance of our food in restaurants - was our chicken free-range, did our jamon feed on acorns - and the same trend is happening in wine, which after all is a food as much as a drink.

This is very much an Old World view of wine, but a progressive one at that - and the wine list reflects that, as it is mainly from the more go-ahead parts of Europe: Languedoc and inland Spain.

We started with a new grape variety for me, Grenache Blanc from Saint Cirice. With a floral aromatic nose, it had a waxy texture, tropical fruit and some spice.

Next was a more weighty Albarinho from Terras Gauda - this is apparently a very popular wine by the glass in the shop, but struck me much more as a food wine with honeyed weight, good acidity and minerality, candied peel and a hint of thick-skinned phenolic ripeness.

Moving onto the reds, we tried a Tours des Genres unoaked Merlot with 5% Malbec added to the blend.

Charles described the producer as "fanatically bio-dynamic" with no sulphur added to the final wine and oxygenation of the wine whilst in the oak barrels.

The results of all this were a ripe, typically perfumed nose of plummy fruit, good sour-cherry acidity, a densely concentrated texture with dark, Christmassy spices and a savoury finish.

The final wine was something rather unusual - a 100% Alicante from 100 year-old vines, again made bio-dynamically.

There are just 2.5ha of these vines on the estate so the wine is made in tiny quantities.

Dark in the glass, the complex nose showed plums, cherries and some forest floor funkiness. On the palate there is bramble fruit, peppery spice, some toastiness and dark chocolate aromas.

After this, we chatted further about Charles's plans to put a seating area outside the front of the shop serving wines by the glass with tapas, the success of his wine club - a monthly mixed case of interesting wines - the awards he has won and his plans for a second outlet "probably closer to London".

As well as the quality of his wines, what most impressed me about Charles is how he "gets" marketing and is confidently but unpretentiously doing everything the marketing handbook recommends and successfully punching above his weight for a small business - he has a well-made and attractive website, a monthly newsletter, each wine has a recommended food match, he holds regular in-store tastings as well as selling wines by the glass, is active on Twitter and writes a monthly column for one of Cambridge's many free local magazines.

But above all, to me, the wine club is the best indicator of success - the club comes at two price points - £60 or £90 and the only element of customer selection is all-reds, all-whites or mixed with (officially) no satisfaction guarantee.

To have a group of customers trusting your palate to this extent and providing a regular inflow of funds is a sign of huge loyalty and trust that many much bigger brands spend years and invest huge amounts of marketing spend to achieve.

Recommended wine: all the wines were very good-to-superb, but the most interesting and enjoyable for me were the Saint-Cirice Blanc and the Alicante Bouschet.