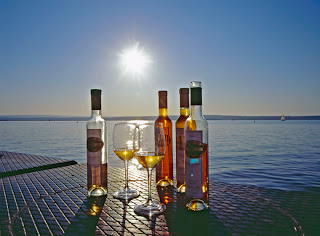 At the Annual Tasting of Austrian Wines in London recently, I bumped into Noel Young - a fellow Cambridge resident.

It was no surprise that he should be there as he was representing three merchants and having won the International Wine Challenge award for best Austrian Wine retailer (more than once), must be considered one of the top sources of Austrian Wines in the UK.

Noel was getting used to the cold of a British winter having recently returned from Australia where he had been overseeing the blending of his 2010 wines in the Barrossa Valley.

I asked him which of his wines we should taste and he suggested a Kracher dessert wine - one of my favourite stickies when I used to visit Austria regularly.

The eponymous Alois Kracher who died prematurely in 2007 was widely considered to produce the greatest dessert wines in Austria. After his death, son Gerhard took over running of the winery with an attitude of don't "change what isn't broken".﻿
Kracher's vineyards are located in Illmitz in Burgenland near the shallow Lake Neusiedl where ideal conditions for botrytis exist and the warm southerly air currents help produce big, rich, intense dessert wines.

This Grande Cuvee TBA from 2008 is made from 50% Chardonnay and 50% Welschriesling and is both fermented and aged in new French oak. It was rich, marmaladey and intense, yet also fresh and balanced with an extremely long finish.

The 2008s are the second vintage for which Gerhard had sole oversight, having won with his father Late Harvest Winemaker of the Year for the 2006s at the 2009 International Wine Challenge.