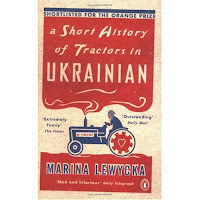 Of the things Ukraine is famous for, high up on the list are probably the Chornobyl explosion, periodic stand-offs with its overbearing, northerly neighbour, vodka and a book about tractors. Once "the bread basket of the Soviet Union", it is also known for its richly fertile "black earth".

It is perhaps less known on the world stage for its wines which are, in all honesty, not world class and generally come from the south, especially the Crimean peninsula which is one of the few parts of the country that does not get too cold in winter for vines to survive. Most famous of these may well be Sovetskoye Shampanskoye, an excellent value, if undemanding, generic sparkling wine which, apparently, is still allowed to call itself Champagne for historic reasons.

Less well known, but of more note are Ukrainian brandies; I spent a year living and working in Ukraine a couple of decades ago, and have maintained links with the country ever since, but Ukrainian brandy is something I have only begun to appreciate in recent years, along with a general interest in aged spirits.

This latest present from a welcome guest is Shabo's VSOP - described by the Shabo website thus:

V.S.O.P. (Very Superior Old Pale) – excellent, old, light; brandy aged in a barrel for at least 4 years. Brandy “Shabo” V.S.O.P. is aged in oak barrel and based on brandy spirits of 5 years old.

Grape varieties apparently include Aligote and Rkatsiteli; Aligote is found mainly as a second grape in Burgundy and is pleasant enough; Rkatsiteli is an ancient Georgian grape (that's Georgia the country, not the US state) which apparently produces noticeably acidic, balanced white wine with spicy and floral notes in the aroma.

Dark gold in the glass - almost mahogany - the nose is wonderfully, rustically rich, complex and warming with a vanilla, butterscotch, almond and heather sweetness. There is more of these on the palate, but also some spice, stewed vine fruits and a surprisingly refreshing acidity giving way to a long, dry finish with yet more vanilla.

Food matches are easy - it goes fantastically well with dark, bitter chocolate and an espresso, especially after a particularly good meal. Alternatively, it also matches with sticky toffee pudding or something rich with spice and mixed fruit such as Christmas pudding or Christmas cake.

Shabo itself is a town in the Odessa region whose name originated around 500 years ago as "Аshа-Аbаg” meaning "lower garden", renamed Schabag by Swiss settlers in the 1820s and later simplified to Shabo.