Fitzbillies, Punting and a Perfect Day Out In Cambridge 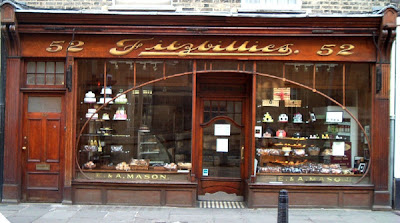 Cambridge is not a big city - in fact it's more of a market town with a big university. 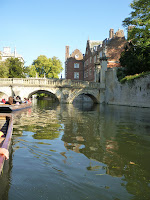 Actually, it's probably more correct to say that it's a market town attached to a university, since the "gowns" own most of the "town" and have much of the best of the city as their college grounds either side of the Cam.

This central section of river with college courtyards, dons' gardens, open spaces and grazing cattle is collectively known as the backs and is perhaps the best part of a city that you can easily walk round in under a day.

In volume terms, there are not all that many sights in Cambridge and not a huge variety - it's just that those we do have are absolutely world class.

It's easy to get complacent about living in Cambridge and treat the various colleges (31 if you're counting) as just so many museum pieces along with the odd church, chapel and a castle that is little more than a mound of earth but gives spectacular views over the city skyline.

So occasionally, when the sun shines, as it has finally done recently, it's nice to remind oneself that we are living in a unique and very beautiful place.

And so it was that at the weekend we packed a picnic and took the short walk into town to Scudamore's to take a punt up and down the river along the backs - which is pretty much the only way to see them properly as all the colleges criss-cross the river and it is impossible actually to walk along this stretch of the river.

I was first taken punting over two decades ago when visiting a friend studying for a Masters here - I had a go and made a complete hash of it and it was only years later that I learnt the golden rule of punting - use the pole to steer the boat. 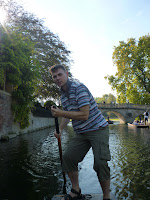 The second thing to know is that the front of the punt turns in the opposite direction to the pole and once you know this, it is a relatively easy and relaxing way to get about - albeit not a quick one as speeds of around 1 mile per hour are pretty normal, if not quite good.

It's certainly a lot more idyllic than the challenge of racing yachts which I did for the first time recently.

Our trip up and down the backs done in just under an hour, we found a spot by the river to watch other people exerting themselves on the longer run to Grantchester and had a picnic lunch.

At this point, I wish I could drop in a review of a perfect picnic wine, but the reality is that with two small children to entertain, there was no scope for a bottle of something pink and fizzy followed by a snooze. However, anyone looking for a picnic wine review can find a couple, here and here.

Instead, we took the couple of minutes' walk to the city's largest play park at Lammas Land where swings were pushed, roundabouts whirled and general encouragement given.

Instead of the usual ice-creams afterwards, we decided to head to the newly re-opened Fitzbillies to check it out.

I first became aware of Fitzbillies and their famous Chelsea buns many years ago when travelling on business to eastern Europe and I mentioned my home town to an expat there.

"Cambridge ?" she said. "Have you tried Fitzbillies' Chelsea buns ?". At this point I confessed that although I knew of the shop, I had not tried their buns and vowed to go there as soon as I got back to the UK. 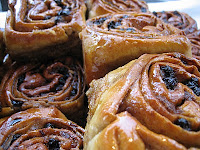 Heavy, sticky and syrupy, Fitzbillies' Chelsea buns were legendary and rather delicious in a very rich and satisfying sort of way.

Sadly, somehow or other, the company went out of business a year or so ago, but was bought and recently re-opened by Old Persean Alison Wright.

I know some of this because my daughter is in the same class at school as Alison's and when we walked in, she said "Look Daddy, there's her Mum".

We made our introductions and Alison explained that the focus now is much more on the lunchtime food with the cake shop as an add-odd rather than it being primarily a cake shop.

And as our daughters were in the same classes, she very kindly suggested that the children should take a cake each of their own choosing with something for at adults as well.

Number one child picked a cupcake with pink icing and an iced flower on top whilst number two child decided he would like a cream meringue and I selected some mini Florentines.

At home, we sat out in the back garden with coffees and juices and divided up the cakes between ourselves.

All proved to be wonderful - fresh and beautifully cooked from good-quality ingredients.

The cup cake was light and delicious, with the icing not too sweet, the meringue was crisp with rich, thick whipped cream whilst the Florentines were an indulgently chewy, sticky and chocolatey.

One of the things I like about central Cambridge, other than the wonderful architecture, is that we do not have rows and rows of soulless high-street chain shops.

Yes, all the usual suspects are here but the city has preserved its mediaeval street layout and small buildings so that shop sizes are generally small with a decreasing but still large number of independents.

So it is good to have Fitzbillies back as a Cambridge institution - and it's good to be able to report that the cakes are at least as good as they ever were.

I'd also like to think that it says something about the quality of the schools in the area that it was an Old Persean who not only saw the opportunity and had the vision and tenacity to resurrect, Phoenix-like, a local independent, but also made sure that it was done properly with high standards.

I have previously noted that we are very lucky in Cambridge to have three excellent independent wine merchants.

The same is true of Fitzbillies and the city would have been all the poorer without it, had it not been brought back to life.