This was the last of my mystery-case wines from Laithwaites - and the most expensive.
Sancerre, from the Loire and always made from Sauvignon Blanc, is rarely if ever cheap - it trades heavily on its name which is why neighbouring Touraine, just up-river and also made from SB usually provides better value.

Sancerre and goat's cheese is a classic combination, so for this wine, I chose a soft, creamy goat's cheese with an edible rind and served it simply - as a starter with a little rocket seasoned with salt and olive oil.

Salty, creamy cheeses need crisp zingy wines to cut through them whilst the green rocket leaves matched with the herbaceous aromas of the wine; the oil provides a touch of pepperiness to match with the rocket and liven things up generally.

It was a hot summer's evening, we had guests and a crisp white was just what was needed. Served well-chilled and poured immediately on opening, it was relatively neutral on the nose with only subtle hints of the typical Sauvignon aromas of freshly-cut grass, gooseberries and nettles.

On the palate it was taut, crisp, focused and classy in a full-yet-restrained way - good structure and some mineral backbone on the finish along with slight hints of flint and gunsmoke.

It started to open up a little more and gain weight towards the end of the bottle - would have been nice to try a second bottle and given it an hour or so in a decanting jug first, but at £13.49, I probably won't bother.
No comments:

Another Aussie Shiraz from Laithwaites - I had one of these in each of the two mystery cases I bought recently. This is the second bottle - the first seemed pleasant, but rather so-so, a bit like many of the Laithwaites wines, if truth be told.

This one seems rather better somehow (bottle variation ? palate variation ?); it's from South Eastern Australia - a gigantic Australian zone that incorporates all producing areas in New South Wales, Tasmania, Victoria, and parts of Queensland and South Australia. It essentially covers 95 percent of Australia's vineyards. It allows wine blended from grapes grown in the various indicated regions to use this name on their label.

There is bramble fruit, cassis and vanilla on the nose, more black fruit, eucalyptus and lots of peppery spice on the palate, well-balanced with soft tannins and a good smooth finish. According to the Laithwaites website, it has seductive red berry and cinnamon aromas. Ripe mulberry and blackberry flavours and a peppery richness that makes it superb with food.

Hmmm, I'd probably agree with most of that.

At £6.49 a bottle (plus delivery) it's reasonable value.
No comments:

The Company Summer Party at Regent's Park or Easy on the Sherry, Auntie 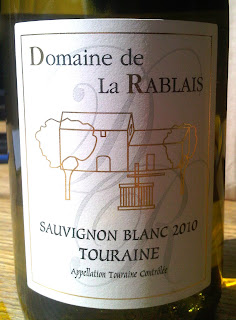 When I was asked to do a wine tasting for my company summer party, I decided to pick some good, classic but perhaps not so trendy wines to see if people preferred them to the usual Kiwi Sauvignon or Pinot Grigio. With hindsight, I guess it was always going to be a bit of a gamble - my wine tastes are, if I'm honest, distinctly old school and I rarely have wine without food, so I tend to choose food-friendly, rather than quaffing, wines.
I was also working to a budget that was more sensible than restrictive, but which precluded any decent Pinot Noir or impressive labels; that meant, in general, wines from humbler origins which would have to impress on their own merits alone. In the end, there was a mixture of value wines from southern France, inland Spain and the Loire, some stuff from the New World and one double medal-winning Bordeaux which slipped over my £10-per-bottle limit.
One of my unstated aims of the event was to challenge a few conceptions and present stuff that I thought my audience (around 30 successful PR professionals) would not perhaps necessarily expect to like, but might actually rather enjoy. With this in mind, I had given my by-now-usual supplier, Cambridge Wine Merchants a brief to help me choose a good range of wines which would cover most of the basics for grape variety and country, match my budget and, hopefully, impress. I am pleased to say that Matt Boucher at the Mill Road branch did an excellent job with some great recommendations, even phoning around to locate additional supplies when we had found something we liked, but of which there were not enough bottles in stock.

The setting for the event was ... interesting - based in a place called The Hub (picture opposite), we found ourselves in a room full of gym equipment with a distinct whiff of locker room in a Teletubby-land setting in London's Regent's Park; I was amazed, however, at how quickly and efficiently a few people transformed it into a setting for a wine-tasting with table cloths, glasses and spittoons, plus a supply of water, crackers, bread and seasoned olive oil for dipping.

The plan had been to start with a game of rounders in the park with a picnic, and then move indoors for the wine tasting; in the end, the main challenge for many people was just to find The Hub itself as it is in the middle of the park and around a mile from the nearest tube station with no obvious direct route; even as we were preparing to start, I took several calls from colleagues along the lines of "I'm on the Inner Ring going clockwise - how do I get there ?" or "Is it anywhere near the zoo ?".

We started with a dry oloroso - many wine enthusiasts (myself included) continue to bang on about how good and underrated sherry is; sadly, my audience was not convinced and it was universally (and entirely undeservedly) disliked. For me, it was a lovely, warming aperitif, with aromas of toasted almonds and pecans, a distinct saltiness and good length, but for my audience it seemed to be a challenge too far.

This was followed by a Touraine, a better-value alternative to Sancerre. This proved much more popular and was even voted best white of the evening - leaner and steelier than the stereotypically lush NZ style of Sauvignon which was ultra-fashionable a few years ago, it was perhaps a reasonably familiar style to many.

We followed this with an Alsace Riesling which proved more popular than I had dared hope - I am a big fan of Riesling and in these post-Chardonnay days, I don't understand why good, dry examples are not more popular. This one had a typical nose of white stone fruit and mineral, good acidity and balance on the palate and a crisp finish. Again, with the benefit of that wonderful thing called hindsight, this perhaps needed some rich, Alsace-style food to show its best.

We followed this with a rich, buttery Chardonnay from Chile which I had expected to be something of a crowd-pleaser. Surprisingly, it was not at all popular, with people describing the nose as musty washing. My conversion to drinking chardie came about probably just around the time it started to go out of fashion in favour of unoaked wines like Sauvignon and more latterly Pinot Grigio, so perhaps I am a bit out-of-step with the times (a few amongst the audience also said that it was the character of Chardonnay from the TV series Footballer's Wives that had put them off).

We finished the whites with a lovely, off-dry NZ Pinot Gris from Spinyback - I have reviewed this wine here before and, whilst it was generally popular, no-one guessed that it had won a medal.

Moving on to the reds, we started with a Monastrell from Yecla in Spain - inland Spain is a great place to go for good value wines (much more so than Rioja for example), and this was beautifully made if a somewhat unusual wine with, paradoxically, both finesse and a slightly rustic character that most people picked up on. We then tried an Italian red which seemed to divide opinion - a Barbera from Oltrepo Pavese, it was more of a quaffing wine than a Chianti, but still had plenty of acid and tannic grip on the finish; some liked it, some didn't.

Next up was a wine I used previously at a Cambridge Food and Wine Society event and had been very impressed by - an old vines Carignan from Herault. Southern French wines can be real crowd-pleasers, ripe and fruity, often with aromas of plums and prunes and a soft finish, they usually make a good quaffing wines, but also have the body and complexity to go with food such as sausages or roast chicken with herbs. This wine was an instant hit and was subsequently voted best red and best wine overall with quite a few people wanting to know where they could buy it. Interestingly this wine has just received a commendation in Decanter's World Wine Awards 2010.

I followed this with something more classy altogether - a double medal-winning 2005 Bordeaux from the Medoc. Even at five years old, it was still quite full and tannic, and the style was definitely more subtle than the wine before; whilst most people quite liked it and quite a few (perhaps politely) said it was very well-made, it was perhaps a less obvious crowd-pleaser than the wine before and definitely needed some air and some food to show its best.

I have always liked red Bordeaux - it was basic-but-good red AC Bordeaux bought from a French supermarket and costing around four Euros that got me properly into drinking wine around a decade ago - and moving the up the scale more recently, I am finding it has a complexity and a texture that few other wines can match; however, this is perhaps not always not immediately obvious on first acquaintance and maybe it takes a few bottles, each with some plain roast meat, to discover this.

We finished the reds with a Syrah from Languedoc - I had thought this would prove popular, but perhaps palates were jaded at this point as, despite a wonderful nose of plums and prunes and a good, balanced palate, it was not so well received. Or maybe it just suffered by comparison with the much more textured wine served immediately before.

The final wine was an East India sherry - again, an attempt to challenge preconceptions. After the dry oloroso had bombed, I was very wary about this wine, but it proved very popular (despite being made largely from oloroso, with just some Pedro Ximenez for sweetness).

As this was as much a fun event as a serious wine tasting, I had also devised a quiz - asking people to guess the price, year, alcohol, content, age and medal status of the various wines. After a few early howlers (guesses for the oloroso ranged from 4% to 30% - the correct answer was 18%), people very quickly got the hang of it and there were some pretty accurate guesses later on; and whilst no-one spotted the two medal winners, there were a few people in each case who noted these as their favourite wines. I was also impressed at some of the pockets of knowledge - some people immediately spotted the rustic nature of the Monastrell whilst others noted the length of the Carignan. Frankly, if you can do that, the rest is just background details.

The Wines - all sourced from Cambridge Wine Merchants
All wines cost around £7 - £10 per bottle (before case discounts), except the Medoc at £12.99 and the sweet oloroso at £17.99
No comments: