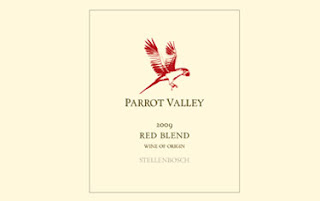 I somehow bought three bottles of this South African red blend (Cabs Sauv and Franc) wine from Naked Wines and decided to wait until I finished all of them before reviewing.

Initial impressions of the first bottle were of its big, rich, heady nose of bramble fruit, vanilla, toasty oak and woodsiness - that's the 14% alcohol level for you.

Likewise, on the palate the texture was pleasant enough, if a little juicy and lacking in tannin.

What I found myself unsure about was the somewhat over-perfumed, blueberry aromas that became more prominent with a bit of air, but it was not serious enough to have me emailing the company for a refund.

The second bottle a few weeks later seemed slightly more restrained than the first, with less of the perfumey aroma on the finish.

By the time we came to the third bottle, it seemed to have settled down much more into a ripe, fruit-driven wine with blackcurrant, dark berry fruit, good acidity and lots of easy appeal.

As something that delivers more in terms of its range of aromas than structural interest, it prompted something of a discussion in the CWB household about wines to impress straight out of the bottle with lots of up-front fruit, but without so much in the way of texture, subtlety or elegance - Lady Gaga vs Fred Astaire, or wines for wine drinkers vs wines for wine geeks.

It didn't specifically prompt a discussion on bottle variation, but I feel I should point out that I have never experienced quite so much variation in three bottles of the same wine (moreover, sealed under screwcap) consumed so closely together.

The other point that occurs to me is that Naked's reds seem to be more acidity-driven than tannin-driven and perhaps this is to be expected as an appreciation of and enthusiasm for the presence of tough, chewy tannins is maybe one of those things that separates the wine geeks from the mere quaffers and Naked is just not in the wine geek market.

And with hindsight, the focus on acidity is perhaps why I often find myself often preferring Naked's whites.

Overall, this is not a bad wine, but for my taste I would rather less on the nose and more on the palate.

I wouldn't buy it again, and if I were in the mood for a fruit-driven South African red, I would go for one of Stephen de Wet's Arabella wines (which I have reviewed elsewhere on this blog).