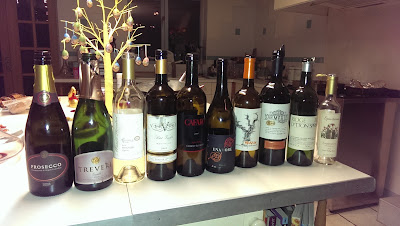 Another blind tasting with friends for MW study purposes

The MW study course had recently taken a friend to California, so a theme of "The Americas" was agreed for this blind tasting, hosted by Gareth John of First Intuition.

There are around eight countries and almost 50 states that make wine in the Americas, so plenty of options apart from main-player California.

We started with a couple of fizzes - including an outlier from Italy.

M&S Prosecco elegant and fresh, everything you want in a Prosecco

Treveri Sparkling Syrah Brut (Washington state) a light, fresh, cherry-fruited, traditional-method red fizz from the Pacific North West with some yeasty, autolytic character; a very pleasant sipper, whilst watching the sun go down over the Cam.

Cafaro Cabernet Sauvignon, 2007 (Napa) big, ripe, alcoholic oaky red, with aged character and plenty of substance. Red fruits and low tannins meant I got nowhere near thinking of a Cabernet.

Enamore 2013 (Mendoza) instantly-recognisable as an amarone, but nothing further; the production method dominates here. Turns out to be a blend of old-vine Malbec, Cab, Bonarda and Cab Franc from Lujan de Cujo in Argentina.

Brazin Old Vine Zinfandel, 2014 (Lodi, California) big and ripe with supple tannins and good freshness, I have no clue about this and am unsurprised to learn it is a grape and region I know almost nothing about. It stands up well to a spicy pork and chorizo stew.

Hacienda San Martin Reserve Red (Medoza) another big, ripe-and-spicy red, but again it does not feel overblown. I hazard a guess at Malbec on account of the dark fruit, spice and the fact that we have not yet had one so far.

Spiriterra Scuppernong 2012 (California) a distinctly quirky dessert wine to try as a curiosity; hybrid grape with typical "foxy" aromas along with alpine strawberries and wheat beer. A much more conventional palate with sweet-but-fresh tropical fruits, honey and beeswax.

Some excellent big reds here, but after all that alcohol, oak and fruit from the country that gave us Big Macs and maple syrup on everything (if something is good, then more of it must be better, right?), I was left thinking that cool-climate reds should be our next theme.

Come on in, Loire, Burgundy and Germany.

Other related articles
The CWB Bordeaux-Off
No comments: 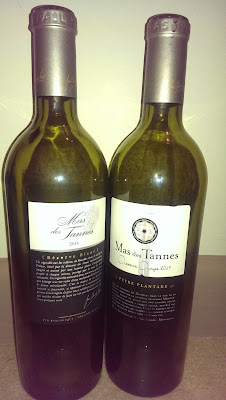 The packaging of these organic wines from Languedoc speaks of an ambitious, modern wine - the heavy bottle, cursive script and clean presentation.

Both wines feel big-yet-fresh, with a clean, organic purity. Both also benefit from aeration, being significantly more opened up and expressive on the second day - and I suspect would have better again on a third, had they had the chance.

Available from indpendents priced around £12. 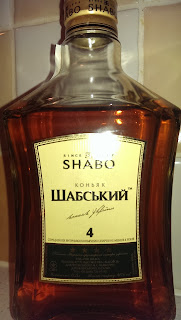 A cognac from Ukraine's Shabo

Ukraine's best oenological products are generally its brandies; this Shabo "Shabskiy" cognac has something of an unfortunate Boaty McBoatface ring to its name.

Konyak "Shabskiy" 4 cooked mixed fruit, sweet spices, freshness and a warming substance, albeit with a touch of nail polish.

Like much from Eastern Europe, it is somehow more immediate and vibrant than what we have become used to in middle-class northern Europe - and, not having lost its rough edges, is all the better for it.

A characterful and assertive brandy that makes its presence felt; thoroughly enjoyable.

To test a personal, theory, I tried it with some Green and Black's and found it a refreshing palate cleanser that matched well with the chocolate.

Email ThisBlogThis!Share to TwitterShare to FacebookShare to Pinterest
Labels: Ukraine 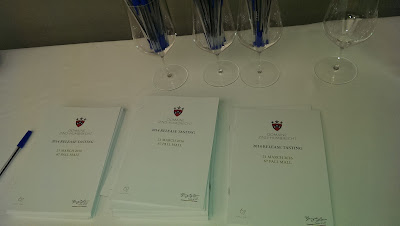 A tasting of 2014 release wines from Zind-Humbrecht with UK distributor, Gonzalez-Byass.

Not fully France, yet not completely Teutonic, Alsace is a colourful Franco-Germanic borderland that seems to take the best of both cultures and make the whole greater than the sum of the parts.

Alsace wines are labelled varietally, like German wines, but with no indication of sweetness levels and, for the better wines, do give some more-detailed indication of geographic provenance.

Richard Bampfield MW put it another way - these wines don't show the sort of typicity that would lead you to put them in front of MW students, but they reflect their origins very well.

Like mature Bordeaux or Jura, I don't often get a chance to taste a full range from Alsace, so this event was a rare treat.

The Rieslings were especially fresh and drinkable, the Pinots Gris bigger and fuller while the Gewurztraminers, if technically correct and impressive, tended towards a monolithic fullness that did not always make the heart beat faster. 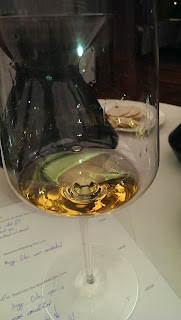 The star of the event was an under-the-table Clos St Urbain Grand Cru Pinot Gris 2001 that has hints of aged character and is showing beautifully now, scoring a Very Good Indeed along with a 2008 SGN Pinot Gris from Clos Windsbuhl. 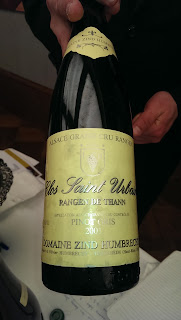 There was barely a wine here that did not get at least a Good and many of the more ambitious wines scored a Very Good.

The most interestingly atypical wine was the Riesling Roche Volcanique 2014 which for me had a Wachau-esque minerality and tense precision and which Richard Bampfield likened to a Condrieu.

Everything from Clos Windsbuhl scored at least Very Good; the Rangen de Thann wines were the most impressive technically if also the most expensive.

Prices ranged from mid-teens to around £65 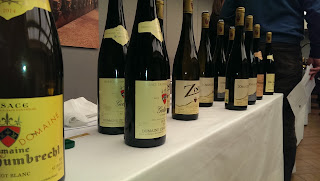 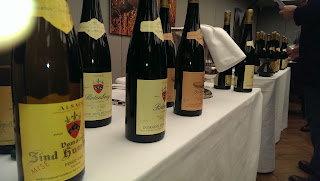 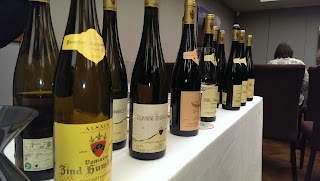 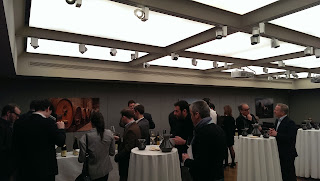 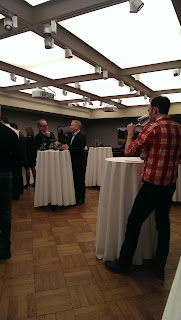 Other related articles
Wine-buying in France: Alsace
No comments: 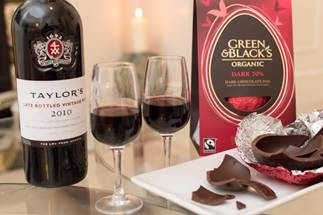 I generally find the  best matches for chocolate are whiskey and an espresso; if table wines struggle to match chocolate's bitter-sweetness, fortified wines hold the best chance of standing up.

Chocolate-based deserts are usually a good match for port, but does chocolate itself work?

There was only one way to find out.

Green & Black’s 70% Dark balanced, aromatic and smooth, with some dried red-fruit and a supple waxy texture.

Somewhat unexpectedly, the wine actually overpowers the chocolate - the fruit and menthol flavours of this youthful port are just too strong in this case.

But don't let that stop you from enjoying either of these separately - or from trying them together to make your mind up for yourself. 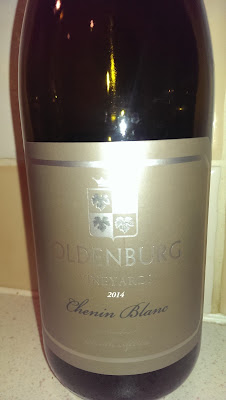 Oldenberg Vineyards is a labour of love by South African investment banker Adrian Vanderspuy - his stated aim is simply to make the best wine he can in what he considers to be a rather special part of South Africa.

I first tasted this Chenin last year as part of a gallery viewing prior to a dinner with Adrian's wines. On reacquaintance, two things are immediately apparent - the incredible high-quality of the fruit and the aging potential of this wine.

This is an very harmonious, very elegant and deft wine - and it will only improve with further aging.

Match with roast fowl, such as free-range chicken or guinea fowl.

Other related articles
Oldenburg - The Long And Short of It
No comments: 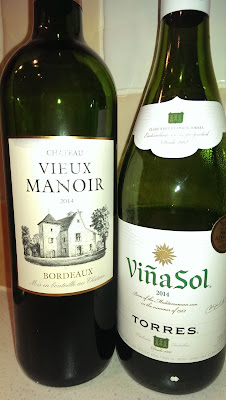 These two wines are on special offer from The Co-op from 16 March to 5 April 2016 inclusive - they are good wines for the money at full price and even better value on discount.

Drink as an aperitif or with lighter foods.

Chateau Vieux Manoir 2014, Bordeaux (reduced to £6.49 from £7.49) one does not normally think of buying wines from the Co-op to lay down - especially those under a tenner; waiting until the weekend is about as long as it gets.

Straight from the bottle (and even with an hour or so in the decanter) this Bordeaux feels a little thin. But a day or three later, it has all settled down into something really harmonious and enjoyable; bramble fruit, cool mint and pencil shavings freshness and a supple texture.

Match with roast red meats and be sure to open well ahead of time if you don't feel like giving this at least a few months' cellaring in a cool, dark place.

Other related articles
Two Spring Wines from The Co-op
No comments: 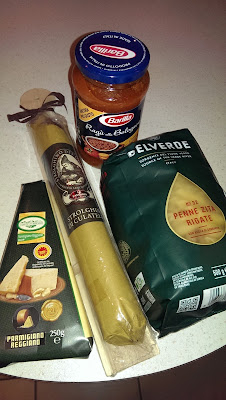 Food from Emilia-Romagna via Italia Regina

Italy's Emilia-Romagna is home to tortellini, Grana Padano, prosciutto and and balsamico di Modena; I recreated the gastronomic experience at home in Cambridge with some local food, provided by Italia Regina.

For a quick midweek supper, or a weekend lunch, serve the salami as a starter and the pasta and sauce, with grated Parmigiano as a main.

To make it into more of an occasion, match with some local wines: 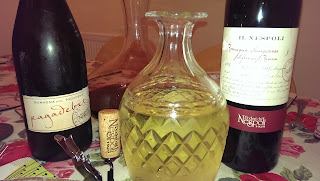 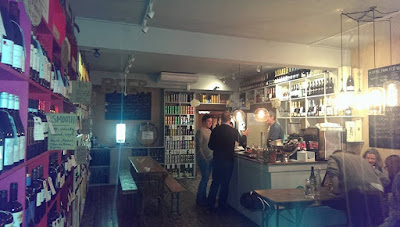 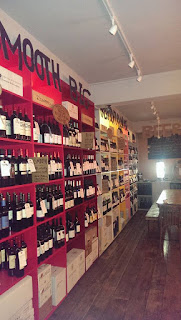 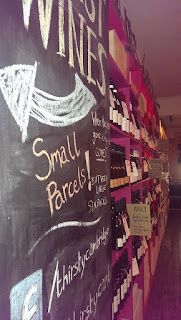 Two Spring Wines from The Co-op 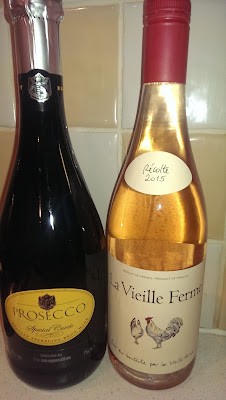 The days are getting longer, lighter and milder. With Mothers Day and Easter on the horizon, we think of lighter, more celebratory wines.

A fizz and a pink from the Co-op are just what's needed for reliable, good-value drinking.

Serve both wines as an aperitif, with vegetable starters or light seafood dishes.

Other related articles
Award-winning Wines From The Co-op
No comments:

Email ThisBlogThis!Share to TwitterShare to FacebookShare to Pinterest
Labels: fizz, rosé, The Co-op 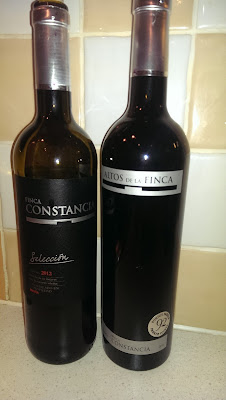 
That Spain is warm can be filed under no sh*t Sherlock. This means big wines with lots of personality. The revelation is that these Fina Constancia wines also have deftness, freshness and sophistication.

A bit like an American Footballer, they are big, but nimble with it.

Match with darker game such as duck ot venison.