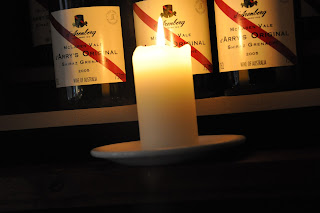 One evening earlier this week, I strolled into town to help Cambridge gastropub d'Arry's launch a "d'Arry's Cambridge case" of d'Arenberg wines.

D'Arry's manager James Storey had got in touch with me via my blog a few months back and was keen for me to come up with some ideas to help get a bit of a publicity buzz around what was central Cambridge's original gastropub, but which has fallen below the radar a little in recent years.

We started with a meal there and then came up with the idea of launching a case of some of the restaurant's most popular wines to take home or for delivery in the Cambridge area, backed up by a series of informal tastings in the restaurant's private dining area.

I was lucky to have good-sized group for the first event and a really interesting cross-section of people. For me, a typical audience for a tasting event is often people who enjoy drinking wine, but for whom it is not a major interest, so one keeps things as interesting and entertaining as possible without trying to cover too much ground in too short a time.

But with an ex-Oddbins manager amongst the audience, with a ready supply of retail-friendly stories to tell (most of which I'd heard before), I felt I was kept on my toes somewhat, but it actually proved very helpful to have someone to explain some of the subtleties of why adding a touch of Marsanne in the blend will enhance the nose, or why Mourvèdre (aka Spain's Monastrell) adds a degree of minerality due to its particularly deep root systems. 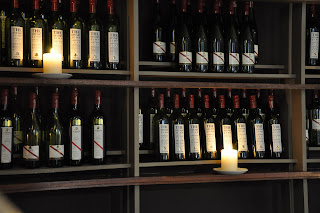 Also of note was a Frenchman who declared that on tasting a wine, he knew very clearly whether he liked it or not, but was not able to describe the style of wines he liked.

This confirmed a pet theory of mine that the French, amongst other wine-producing nations, seem to grow up with an almost instinctive knowledge of what makes a good wine but, as a nation, tend not to go in for the wordy descriptions and detailed tasting notes so beloved of Anglo-Saxon countries.

To me, this is because non-wine countries, such as the UK and USA tend to treat wine appreciation as something of a competitive sport rather than just a way of life.

We started with a Hermit Crab, a blend of Viognier and Marsanne - and encouraging people to swirl the wine in their glasses before sniffing deeply, sipping and slurping in some air brought about the almost-standard comments of "Wow ! It really tastes much better when you do that" of people who are not accustomed to doing this.

Peachy and apricotty on the palate, the wine also had a honeysuckle, floral nose from the Marsanne.

Next was a Stump Jump Riesling / Marsanne / Sauvignon blend with the focus and minerality of the Riesling, the nose of the Marsanne and just a touch of minerality from the Sauvignon.

Responding to a comment about the finish, my friend from Oddbins succinctly summed it up as short flavour characteristics but long on intensity characteristics.

The final white was a Lightly Wooded Chardonnay which proved popular, especially amongst those who do not like the overripe, overfruity, over-oaked pantechnicons popularly associated with Australia these days.

The first red was a Stump Jump Grenache / Syrah / Mourvèdre blend - typical of Languedoc and with lots of ripe plummy fruit and spice on the nose, it was an easy quaffer, but would also go well with barbecue food.

The d'Arry's Original Shiraz Grenache was a much classier affair with dark berry fruit and more in the style of a Rhone, with a dense, inky texture.

This proved to be our French visitor's favourite as he explained he likes "Cotes du Rhone but not Bordeaux".

The final red - a High Trellis Cabernet Sauvignon, with plenty of ripe tannins and varietal bramble fruit and cassis - was not at all to his taste but was the favourite of one of the audience who was vegetarian, despite it being the sort of wine to match with meaty dishes like steak and roast beef.

If nothing else, this last point just goes to prove how personal matching food and wine can me, although I do note that Debra Meiburg MW, an ex-vegetarian who still sticks to fish and lighter meats, prefers (lighter) Burgundies to (chewier) Bordeaux to match with her food.

Overall, it was a great start to what will be a series of tasting events to launch the d'Arry's Cambridge case.

Perhaps it's the teacher in me, but it was great to see people trying wines and enjoying them as much as I do.

The quality of the d'Arenberg wines is quite uniform and they have a strong house style of being ripe and technically well-made, but not overblown.

For me, however, the most interesting wine of the evening was the Shiraz Grenache for its inky texture.

Tickets for the tasting events are £12.50 (with the price refunded against any purchases on the night) whilst the d'Arry's Cambridge case costs £60 for 6 bottles, a discount of almost 50% on restaurant prices.