At the end of my last visit to The Punter for a seasonal dinner, chatting to Group Head Chef Paul Fox and Operations Manager David King, I was invited to come along again to their autumn dinner.

With an email a few weeks ago from Punter Chef Ben Pope confirming the date, it was duly put in the diary to ensure there was no risk of me missing it. 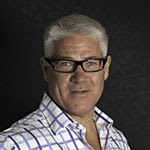 On arrival, I was met again by the charismatic Jacko Scott (pictured, right) of wine merchants Jascots who had sent up some wines for Paul and Ben to dream up suitable matching dishes.

The previous dinner had had a poshed-up picnic theme, with traditional British foods, including rather a lot of game, given a refined make-over.

On this occasion, the appropriately seasonal theme was "Big Game and Big Wines", whilst the inspiration was take-away food.

One of the things that has impressed me so much on my visits to The Punter is their sense of style as well as substance - for, not only is the food imaginative and well-made, but it is also presented with knowing touches and throw-away jokes that give the place an edgy, unstuffy sort of feel. They have appropriated aristocratic elements - game, fine dining, classic wines - refined them into something more sophisticated and then present them with a touch of urban tongue-in-cheek.

On the wrong hands, it could all seem a bit too-cool-for-school, but Ben and Paul manage to make it feel effortless and not detract from the quality of the food and wine.

The quarterly dinners also feel a bit like family get-togethers, with lots of lively, breezy banter and in-jokes.

Our wine on arrival was a NV Cremant de Bourgogne from Louis Picamelot, made from 60% Pinot Noir, 30% Chardonnay and 10% Aligote. With lovely prominent, linear acidity and minerality, it was indistinguishable from a good Champagne.

If you want a big, classy white to match with game, the obvious choice is an oaky Chardonnay and so we started with the Daddy of white Burgundy, a Meursault 2008 from Domaine Philippe Chavy.

It was matched with Crayfish Scotch Quail Egg and Salt Cod Fritters - served in egg boxes - which were delicious, but for me a touch too hearty for the wine.

Oaky Chardonnay has gone somewhat out of fashion at the moment, but this wine reminded me of why I liked it in the first place - relatively neutral on the nose and with citrussy, pear fruit, the interest was all in the superb oaking with complex layers of toasty, nutty oatmeal and vanilla spice with a long finish, balanced by rounded acidity.

At the previous dinner I had particularly enjoyed sitting next to Jacko who is hugely entertaining and, if occasionally inappropriate, only the more hilarious for it.

On this occasion, Jacko was on good form again as he introduced the wines, and I was sat with French wedding photographer and twitter-buddy, Jean-Luc Benazet, his wife and her sister and fellow photographer, food blogger and tweeter, Ozzy (whose take on the evening is here).

The first of the main courses was a Kentucky Fried Wild Duck with BBQ breast, matched with a somewhat unusual, an Australian Bellvale "Quercus Vineyard" Pinot Noir from 2008, which had a surprisingly old world structure and acidity, with some toastiness, fresh, vibrant cherry fruit, mintiness and sweet vanilla.

Tasted alone, it was reasonably impressive, but with some air and densely smoked duck breast to match, it became really quite superb.

We followed this with Saddle of Hare with Pearl Barley, Porcini, Kale and Cobnuts, matched with a Barolo Tre Ciabot, 2005 from a tiny 0.6 ha vineyard.

The wine had a brick-red hue in the glass with cherry fruit, liquorice, sweet vanilla and mint on the palate. With a gentle but firm grip on the finish, the mintiness of the wine matched superbly with the intensely gamey flavours of the hare.

The final course of our game-fest was local muntjac, supplied by Radwinter, with an Armonio des Mas Neuf 2005 Pays d'Oc from Costieres de Nimes.

Billed as being "From The Curry House", the muntjac had been roasted with a thoughtful marinade of dark spices, rather than being served in industrial curry sauce.

The wine was introduced by Jacko as from a producer who had explained he wanted to make the best wine in the region and, whilst his entry-level wines were wide of the mark, this one might just have done that.

Dark in the glass for a six year-old wine, it retained an amazing amount of primary fruit of elderberry, cassis, plums and prunes; on the palate there is also sweet vanilla, spice and, again, mintiness. It was a lovely wine, but to me the match did not work so well and it would have been better suited to a sweeter and fattier meat, such as roasted joint of lamb.

As it was, the lean, spiced muntjac might well have proven a great match for the kind of herbaceous and spicy Douro reds I tasted the week before.

The cheese course of Blue Cheese and Charcoal Biscuit matched wonderfully with a delicious De Bortoli Botrytis Semillon 2007 from South East Australia - I consider myself something of an expert on botrytised wines and my favourites generally come from Austria. However, this was as good an example as I remember having in a long time with a pungent and intense nose of honeysuckle and botrytis, marmalade and acacia honey on the palate, balanced with a fresh acidity and some minerality on the finish.

The final part of the evening was a charity auction for Friends of Chernobyl Children organised by Jenny Lindop and, having lived in Ukrainian capital, Kyiv, for a year and still having friends there, it is something I feel very strongly about.

With a theme of Big Wines, there was perhaps not quite so much variety of styles as there had been at the previous dinner and the take-away theme did not hold together quite so well as that of a picnic; however, these are observations rather than criticisms and the quality of the food and wines was superb.

It was also great to get to know a couple of tweeps and fellow bloggers in person, proof perhaps that online friendships can also turn into real ones.


Finally thanks must go to Chefs Ben Pope and Paul Fox and Operations Manager David King for inviting me back to a wonderful event.

It hardly needs be said that there was not a bad on show, but some are deserving of a special mention.

Both the Cremant de Bourgogne and especially the dessert wine were lovely and the Pinot Noir worked superbly with the duck.

Best red wine of the night was the Armonio des Mas Neuf 2005, Pays d'Oc, but best white and best wine overall was the Meursault 2008 from Domaine Philippe Chavy, £28.30 from Jascots.

Other related articles
Food and Wine Matching at The Punter
Hidalgo Sherry Dinner With Cambridge Wine Merchants at The Punter
Lunch at Hotel du Vin Cambridge
Families and Friends Dinner at Fitzbillies, Cambridge