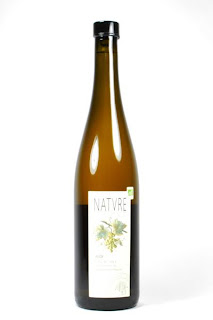 I sampled this Alsace Nature from Marcel Deiss at the Boutique Wineries Tasting recently with Barry McCaughley from Barry James Wines.

On first tasting, I gave it a single tick, indicating "worthy of note", before adding a second and then a third meaning "really rather special" as I found myself appreciating its intense focus, minerality and purity.

I was impressed by the subsequent Deiss wines I tried but not as much as by the "entry-level" Nature (at £18, however, it is not exactly cheap - unless you compare it to the other Deiss wines).

For me, it was the best wine of the tasting and I arranged with Barry to do a more in-depth review of a single bottle.

At the tasting, I had concluded the wine was like a genre-bending cross of minerally Wachau Grüner Veltliner with a touch of oxidative fino sherry thrown in, so I was keen to see what a whole bottle would reveal.

On a hot evening in Cambridge, in a bit of a rush, I chilled the wine then opened and serving immediately with no decanting.

More than just a technical detail, this is quite key to getting the best out of this wine as, part-way through the meal, I asked Mrs CWB what she thought.

She pulled a face and said "It's alright, but a bit underwhelming ... this is the one with the glass stopper that you raved about, right ?"

And I had to agree - it was good, but would not blow anyone away on this showing.

For my part, I could feel it gradually improving during the course of the meal, becoming more like the wine at the tasting, but it was still a way off that and we both agreed it would almost certainly benefit from some air and so decided to leave the last 1/3rd of a bottle for the following day.

Re-sampling 24 hours later, we were both much more impressed; it had become bigger, fuller and more mouthfilling with a greater depth of flavour and I regretted not having had a bit more patience earlier.

I have written else about the effects of air and the disappointment in finding a bottle of reasonable wine suddenly turning into a stunner just as it is being finished off, having had aty that point the right amount of aeration during the meal.

So if you do buy this wine - and I really recommend that you do, especially if you like either crisp, minerally whites, dry fino sherry or the idea of a combination of the two - I do suggest that you decant for at least and hour before serving or, even better, eke it out over a couple of evenings to see how it develops.

As for a tasting note, I cannot add a huge amount to how it showed at the tasting.

Relatively neutral on the nose, without aeration it is crisp, lemony and merely very pleasant in a well-structured sort of way.

Greater exposure to air does not add to the nose and it remains quite neutral with little in the way of overt, primary fruit.

Instead, the acidity develops into something much more rounded, focused and prominent, but also mouthfilling.

There is also a greater depth of flavour; a combination of savouriness and thick-skinned phenolic ripeness with some tertiary, evolved, oxidative sherry-like characteristics.

The finish is longer now, too, with savouriness and minerality.

It feels poised, powerful and intense - but I am left searching for the right descriptive words.

It is on many levels an odd mixture of things, sort of New School-Old School; an organic, bio-dynamic field blend, neutral yet intense, old school in the vineyard yet technically well-made in a modern sort of way with little overt fruit and mostly tertiary characteristics.

It is distinctly "Austrian" in style and seems to hark back to a time when wines were not so fruit-driven, yet also feels modern and thrilling.

Just remember to give it plenty of aeration first to see it at its best.