Tour de Belfort: The Challenge‏ (and an offer) 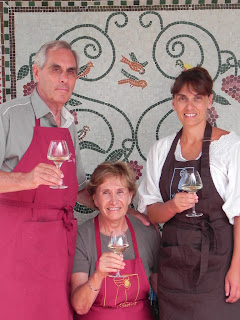 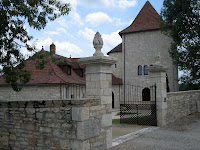 The other week, I met Muriel Lismonde who, with her family, runs Tour de Belfort, a start-up winery in Cahors.

The project started when Muriel's father sold the Paris-based family business and used the proceeds to buy a ruin and some land in the village of Quercy in South West France.

I get the sense this must have felt like "another of Dad's projects" for the family, but with the funds from the sale of a successful business, it turned out to be on a much grander scale than the usual tinkering in his garden shed.

And with the family roped in to help with everything from the restoration of the buildings and the creation of a brand new vineyard and winery, to the selling of the wine directly, there is something of the cult of the amateur about it all. 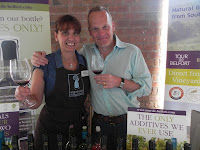 Part Grand Designs, part The Good Life, the project seems to have gained a life of its own, moved along by the force of Dad's vision and drive.

Someone I met at a networking lunch the other week told me that he and his wife approached decision-making according to Harry Secombe's philosophy - I decide all the important stuff like should be in Europe, what our exchange rate policy should be or should we go to war with Russia, whilst she sorts out the minor details like what shirt I'll wear and what to have for dinner.

I rather fancy that Lismonde Père is a little like this - deciding on what vines to plant, designing the labels and determining whether the wine should be bio-dynamic, organic or natural and leaving minor matters, such as the actual selling of the finished product, to family members.


As a result of all this, Muriel spends much of her time travelling around trying to sell the wine directly at shows and exhibitions, such as the Three Wine Men, as they have found it so far impossible to break into the UK market.

Selling an unknown wine from a brand-new vineyard from a backwater region of France is no easy task under any circumstances.

However, wines from Cahors and the French south west in general have a reputation for being spicy, a bit rustic and mostly red, so to sell a mixture of reds, whites and rosés that are organic, well-made and balanced is all the more challenging.

Add in a price tag in double figures, a screw-cap closure and a distinctive but rather cheap-looking label and it is almost as if they are making life deliberately difficult for themselves.

And yet, having tried the wines, I have been very impressed; the result of completely organic approach and a strict attention to detail is an extremely well-made and balanced output with great depth of flavour. Not only is the vineyard free of pesticides and herbicides, the winery is almost clinically clean reducing the need for any additives in the wine - just some neutral, organic cultured yeasts and very limited quantities of sulphites to preserve the wine in bottle. 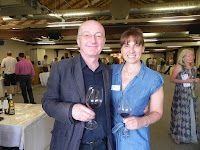 The wines are also low in alcohol, making them very food friendly, but have enough southern warmth to be welcoming and approachable.

As Muriel explained to me the problems in getting UK distribution, it struck me that there is something of a Catch-22 at play here; what would secure distribution is a definite interest, but there cannot be any interest if the wine is not widely available.

The family decided to sell directly via their website, but desperately need to raise their profile generally - and there are only so many hours in the day for everything. 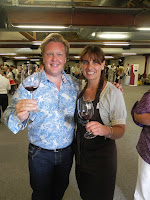 After meeting Muriel and hearing her story, I felt that I wanted to do more than just try the wines and write-up the usual tasting note and resolved to get involved in helping bring this wine to the broader audience I think it deserves.

Having agreed a deal with Muriel to cover my time, I negotiated a discount for readers of this blog: look on the Tour de Belfort website and you'll see the following prices:

Now, I realise I have staked my reputation with two sets of people - firstly with Muriel, since no-one may actually take up this offer and secondly with anyone who does buy the wine, and could potentially be disappointed at my recommendation.

If I'm honest, my greatest fear is that no-one will take up the offer - I'm sufficiently confident in the quality of these wines to believe that people are unlikely to be disappointed by them.

I also think that they are priced more than fairly and that it would easily be possible to spend more money on something less good. (For more detailed reviews of the wines, see here for the red, white and rosé).

So the real issue then is will the thousands of people who visit this blog every week - those in the UK at least - actually do more than just read my wafflings and actually take my advice to buy this well-made, organic, almost natural wine at a tenner a bottle.

I can't give any satisfaction guarantees or money-back promises like the big internet players do; I won't be adding in a free bottle of something "sumptuous" that "should sell for twice the price", or even one of those rabbit corkscrews if you order right now.

However, I am staking my reputation on this. And remember this wine is made by a family outfit with low overheads and no marketing budget, so you are essentially buying it at the producer's direct cost plus with no middle man - and then with a discount.
And if you need more than just my recommendation, then here's what a few other wine people have to say:

So, all that remains then is for you to try the wine and let me know what you think of it. And tell all your friends about it, too. And your family, long-lost relatives, dinner party guests, people on the bus, random strangers ... what are you waiting for ?