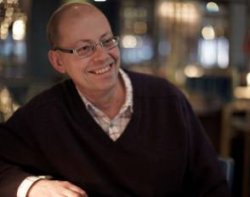 Last week, I found myself at a Champagne tasting at Alimentum with Nick Adams MW after winning a place for knowing the number of bubbles in a bottle of Champagne (49 million, apparently).

The format of the evening was three flights of fizz with a talk from Nick, followed by dinner - and more fizz.

We started on arrival with not a Champagne but a Spumante Perle D'Oro NV from Portinari in Soave. Crisp and toasty, it showed sweet apple and pear fruit, a fine mousse and a yeasty, leesy finish - a good start.

The tasting itself was divided into three flights which Nick Adams talked through. Aimed at a general audience with no background knowledge, he talked through the basics of how Champagne is made from the chalky soils to the grape varieties and the method, peppering his talk with wry observations and anecdotes.

The theme of the first flight was increasing quality: the first wine was a light, uncomplicated, primary Prosecco. A Prosecco Superiore di Conegliano Valdobbiadene Brut, Rocco NV it showed hints of pear fruit and pear skin on the nose, with pear fruit and sherbert on the palate and a touch of persistence on the finish.

Next was a pair of wines from Roederer - a Quartet Brut NV from Anderson Valley in California and a Louis Roederer Brut Premier Champagne.

The New World wine was well-made but for me had rather too much yee-ha - an expressive nose of sour hay or sharp cider, brioche and Pinot-esque fruitiness. On the palate, there is crisp apple fruit, a leesy, fruity funkiness with a fine mousse and a persistent finish.

By contrast, the French wine, which showed much of the same House Style, was far more elegant and restrained, with greater subtlety and balance and a longer finish and for me was much the better wine.

It was like comparing a fake chateau in Beverly Hills with the real thing in Reims - or Pamela Anderson with Catherine Deneuve.

The second flight show-cased the different grape varieties used in Champagne: a 100% Chardonnay from Pierre Gimmonet Cuis 1er Cru Blanc de Blancs Brut NV had a light, slightly musky nose with notes of orchard fruits. On the palate, there is fresh, crisp Granny Smith apple, sweet pear and yeasty brioche with a creamy texture. Linear and slightly mono-dimensional, it was nonetheless extremely elegant.

A Drappier Carte Blanche Brut NV from 90% Pinot Noir had a funkier, fruiter nose with pear skin aromas. With more body on the palate, it felt rounded and mouthfilling with sweet pear fruit and a persistent, slightly grippy finish.

Finally in this flight, a Laurent-Perrier Cuvee Rose Brut NV from 100% Pinot Noir with colour from skin contact only had lots of red fruit on the nose and a funky farmyardiness.
With ripe, rounded fruit on the palate, more funky aromas and a food-friendly weightiness, it has a persistent finish.

The final flight was just two wines from Bollinger - non-vintage and vintage. The first, a Special Cuvee Brut NV, was 60% Pinot Noir with a funky, fruity Pinot-esque nose, aromas of pear skins and sharp, cidery notes.

On the palate, it was rounded and mouthfilling with yeasty brioche, green apples and soft red fruit. Great complexity and depth and a long, persistent finish.

The best wine of the evening so far.

However, the real show-stopper was the final wine, La Grande Annee 2002; aged 100% in oak for the first fermentation, it spends 6 years on the lees and comes from 71% Grand Cru vineyards and 29% Premier Cru.

Concentrated, intense and powerful, it was really quite amazing, utterly superb and despite its decade's age, still quite youthful.

Over dinner, chatting with fellow guests, I came to several conclusions about the event:

- the presentation had been very traditional and structured; Nick had stood up and given a (very informative and entertaining) talk, taking few questions

- the wines had been not just of very good quality but were very well-served, at just the right temperature

- more than this, they were extremely well-chosen, both as examples of a particular style, but also within the overall structure of the talk; the New World wine tasted exactly like the more fruit-forward, less elegant, less expensive wine that it was and the contrast between the two was excellently made. The Grande Annee not only was superb, but even more clearly so in the way we had built up to it via lesser wines.

So, for me, the quality of Nick's talk, informative and entertaining as it was, was the least of what made it a great evening - the wines ranged from the very good to the totally superb, but this was still not the clincher. It was the structure of the tasting and the quality of thought that went into the selection that I will remember; and I am minded to think that that is what a presentation by an MW brings.

After the tasting, we enjoyed a dinner by Alimentum chef patron Mark Poynton matched to various fizzes.

Email ThisBlogThis!Share to TwitterShare to FacebookShare to Pinterest
Labels: Champagne