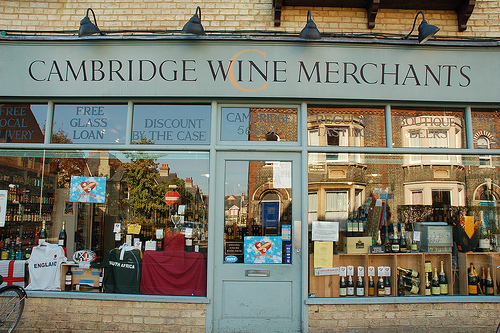 Last night I went to the Cambridge Wine Merchants wine bar on Cherry Hinton Road for a Riesling-off; a comparative tasting of Rieslings from the New World and the Old, it was presented by Mill Road branch manager, the well-spoken Alex Woolgar-Toms.

Riesling is perhaps my favourite grape variety and was certainly my first love with its zippy, linear, food-friendly acidity, lemon-lime fruit rounded out with a touch of honey and persistent, minerally finish.

And although it has a very distinctive personality, it is also highly expressive of its terroir, showing distinct differences from region to region and found in all sweetness levels from bone dry and linear to unctuously sticky yet refreshing,

The benchmark areas for Riesling are mainly Germany, Alsace and, increasingly, Australia. Chile and New Zealand also do some, but my personal favourites are the powerfully ripe and full-bodied yet dry examples from Austria's Wachau.

However, for this tasting, we started in Western Australia.

An expressive nose of lemon, stone fruit and mineral, with hints of petrol. Ripe lime cordial, sweet lemony fruit and good depth on the palate with well-balanced, mouthfilling acidity.

Poised, precise and long on the palate, it has a persistent finish.

To me, this was the most "Austrian" in style and proved to be my favourite wine of the evening; however, Alex explained that Western Australia is such a diverse and relatively new region, that there is no particular house-style and this should not be necessarily be seen as in any way typical of the area.

Paler in the glass, with a more restrained nose, this is clearly from a cooler climate.

The grapes are grown at an altitude of 500m, giving a taut, linear acidity on the palate, with precise, austere lemon-and-lime fruit and a persistent finish.

For me, this was a textbook lean Australian Riesling; a skinny catwalk model of a wine, all razor sharp cheekbones and a deadpan expression - and probably just as difficult to live with as well.

Unsurprisingly, it was the least popular wine of the evening with the audience in general and has a Decanter 5 star award, which says a lot, I think.

A little closed on the nose, this is a pale lemony-yellow colour. There are hints of white flowers and greengage.

On the palate, there is sweet lemony and pineapple fruit, pear drops and a thick-skinned toasty yeastiness.

Elegant and balanced, it is slightly off-dry with sweetness and minerality on the finish.

Bright gold in the glass, the nose is developed with kerosene, minerality and a touch of industrial gas.

Weighty and mouthfilling, there is dried pineapple and yellow apricot pieces and a touch of cindery ash. Long on the palate.

The half-degree more alcohol here does not really do justice to how different this wine seems compared to the previous one: at eight years younger, it feels brighter, fresher  and less mellow, with a more primary, less developed nose of waxy, floral honeycomb.

The bottle is sealed with a gold foil top - wine-maker code for a particularly ripe wine pushing the limits of the next category up - but I found more to be less here, for although it is fuller on the palate, it is not as long, with the sugars perceptibly breaking down.

Palate-length aside, it is shows good, balanced sweet-sourness with lime cordial and apricots.

Alsace's Rolly-Gassmann is something of a superstar producer, selling a significant proportion of its wines through Michelin-starred restaurants.

That this is one of their entry-level single-vineyard wines is a bit like buying an expensive Fiat in the hope of a bit of Ferrari magic rubbing off.

Bright pale gold in the glass, it shows aromas of waxy honeycomb. The palate shows lots of sweet, candied fruit which then starts to fade, but is complex with a persistent finish.

It feels less balanced and elegant than the Mosels - even if there is more complexity - and it reminds me of a Premiership striker on an off-day; disparate hints of brilliance, but not the complete package.

Alex, our presenter, turns out to be something of a Romantic as he reveals that this flawed genius is his favourite of all tonight's wines.

The vote-off for the others shows a relatively even distribution - except for the piercingly challenging Skillogalee which gets a Eurovision-esque nul points from the assembled crowd.

For me, a full-on Riesling Fest would have to include examples from Austria, New Zealand and Chile, but tonight's selection seems to reflect Cambridge Wine's overall ethos, with a bias towards well-made Old World classics.

As noted, for me, the best wine of the night was the Plantagenet, which is not cheap but worth every penny of its price tag for its rounded complexity and balance.

However, the best value was the 1994 Auslese which at £12 is ridiculously cheap for a 20 year-old wine that is fresh, mellow and long.

I attended the event as a guest of CWM owner, Hal Wilson.