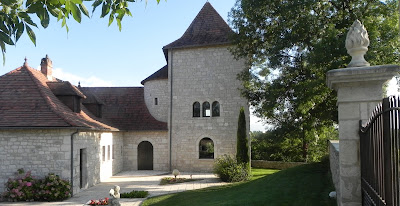 Rural Cheshire is a long way from Muriel Lismonde's childhood home of Cahors in the Lot Valley where she now runs a family wine-making business with her parents, Tour de Belfort.

Sitting in Muriel's lounge overlooking the leafy Cheshire plain, I listened to her explain the long and complicated but fascinating history of how she came to be involved in wine-making, starting with the Cathar history of the south west and her parents' family business in Paris, the proceeds of whose sale were invested in a tumble-down ruin based on a childhood bet about living in a tower that they would walk past on Sunday afternoon strolls.

Most people I have met who go into wine-making as a second career outsource at least the trickier parts to a greater or lesser degree - usually as a minimum purchasing an established vineyard and often buying in oenologists and vineyard help, too. 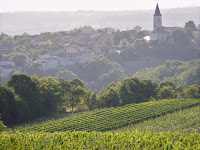 However, the head of the Lismonde family decided to do things rather differently and started with little more than a ruined chateau and some adjoining land, plus the help of a Swiss consultant oenologist. He then set about restoring the property and planting the vineyard from scratch, choosing mainly Bordelais varieties for reds and whites plus one extraneous variety of each colour.

With the financial freedom to treat the wine-making as something of a retirement hobby, they follow a mixture of organic and bio-dynamic practices, tempered with just enough real-world pragmatism to ensure the finished wine will survive on the shelves - so, there are no herbicides or pesticides, the grapes are hand-picked and the berries hand sorted, but sulphur is added to the wine (albeit in very limited quantities) to preserve it. 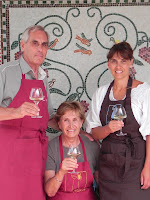 Muriel describes their facilities as ultra-modern and ultra-sterile, defying the quaint, peasanty image of natural wine-making; however, this focus on spotless cleanliness has a real-world benefit as it protects against oxidisation, temperature variation and bacteria in general which in turn reduces the need for sulphites or other additives in the wine.

Of course, making the wine is only the first step - it then needs to be sold and this seems to have been a far greater challenge. Muriel initially approached local restaurants in the nearby old money village of Alderley Edge only to find they had outsourced their wine lists completely and exclusively to large distributors. 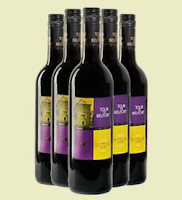 Next they tried the independents; with local Premiership footballers buying cult wines at hundreds of pounds a bottle, there is definitely the affluence to afford more than just supermarket special offers, but an artisan wine priced in double figures with no track record or awareness is not an easy sell.

Especially when the label designed by Lismonde père, combined with the pragmatic but un-Romantic use of a screwcap closure creates the impression of a £5 supermarket own-brand quaffer.

A new, relatively expensive wine like this with a story to tell needs to be either hand-sold or have a pleasingly, appropriately classy label. So a much-needed redesign was finally arranged and the colour-coded quadrant layout replaced with a clean, fresh herald with a touch of gold, on a white background. Eye-catching but with a nod to tradition, it looks fresh but evokes Old World heritage and, more importantly, stands out well on a quick scan of shelves.

If the UK market is proving particularly difficult to break into, there are fewer problems in France itself where they have both a distributor and cellar-door sales - the ultimate aim is to develop a small number of holiday cottages and promote the wines jointly with gastronomic tourism.

Unable to produce the wine in the quantities needed by supermarkets or the major internet players and finding that the pricing of the few independents prepared to stock the wine was commercially unattractive, they have decided in the UK to sell the wine directly to consumers and then hope to be "discovered". 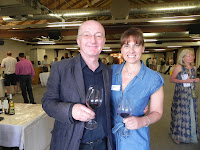 With a mixture of word-of-mouth sales and events, they have been able to arrange a number of tastings in Cambridge via a family connection (which is how we first got in touch with each other) and are touring the country with the Three Wine Men series of events.

It all feels like a very old-school approach, with almost nothing outsourced and the family having to deal with every aspect of the business themselves and rather reminds me of one of those episodes of Grand Designs where the would-be developers have the vision but no budget and so end up doing all the work themselves, from rubble-clearing to masonry.

Yet they are clearly making a success of the wines as, with only a few vintages under their belts, they have already garnered a number of awards, including golds and silvers.

Eight grape varieties cultivated meant that the early vintages were mainly blends and all were unoaked as there were simply not the resources to vinify each variety separately, let alone in oak.

However, from the 2011 vintage, there is a varietal wine made from the indigenous Côt, labelled - with an eye to the broader market - under its international name of Malbec, with some of the wines due to be aged in oak. All of this adds to the cost and increases the minimum price that must be charged for the wine - in theory making it a harder sell as the price further increases for an unknown wine.

Of course, the dream of every wine-maker must be to set prices based on market demand and not cost-plus - and, with their dedication to quality, I suspect it will not be too long before the Lismonde family are in a position to do this.

At the moment, they are still finding their way a little - the vines are young and need to be hand-harvested with yields reduced from 12 bunches to around 4; the tower has been restored but more ruins remain to be developed; they have not yet solved the problem of selling in the UK efficiently.

I can't help feeling that, whilst passion may be the best brand, they could make life easier for themselves by outsourcing more - or at least taking more specialist advice on the sales side of the business.

Making great wine is, sadly, just the start - especially in a relative backwater like Cahors that has little consumer resonance. And whilst it may go against family wishes, certain compromises to make a wine that fits into a certain pigeon-hole - a fully natural wine, for instance - might well pay off in terms of exposure.

And, indeed, they are very close to achieving it - a meeting with Isabelle Legeron resulted in just a single recommendation regarding the use of wild, indigenous yeasts alone, to meet her definition of natural wine, whilst by November 2012, they expect to be certified organic by Ecocert.

But parents, like children, need to be allowed to make their own mistakes and if it proves more difficult to build a reputation based on a no-compromises approach, the end result may be all the better for it - even if it ends up taking longer to get there.