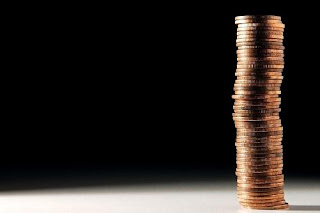 With the recent news that the UK economy shrank 0.5%, we are clearly still not out of the financial woods, so it seems timely to consider what makes a value wine.

Supermarkets often have value ranges - this is usually a reference to them being 1) cheap and 2) unbranded (or at least generically branded as "own label").

To my mind, absolute price is no indication of value - a £3 bottle of wine is poor value if it is undrinkable, whilst a £10 bottle which outperforms more expensive examples can be great value, provided you like it.

And that's the key issue - value is a very personal, subjective matter, it's based on an assessment of what you think personally (although the opinions of others are relevant in a way, too, as we shall see).

Value is about cost versus benefit, and benefits are subjective judgements.

I remember a boss many years ago who was a bit flash and said when at a restaurant, he always insisted on buying the most expensive Champagne on the list. I don't believe that tasting blind he could have told the difference between an expensive but middling Champagne and a cheaper alternative, but to him it was important to be seen to be drinking Champagne.

Nowadays, we'd call him a label snob, but for him restaurant Champagne was good value because the benefits (relating to image and perception rather than to the wine itself) outweighed the cost.

In a sense, he had fallen completely for the myth that luxury brands are a symbol of success and sophistication - this was before the days of The Millionaire Next Door, remember.

These days, I measure value, in a wine or anything else for that matter, by the formula:

What I paid / what I would be prepared to pay

Anything over 1 is good value, anything under 1 is bad value, whilst 1.0 means it is priced just right - for me, that is.

The part of the value calculation that can be affected by the attitudes of other people is the actual selling price and here fashion can play a huge part, depending on the pricing model used.

There are many pricing models for goods and services, but the two key ones to consider here are cost plus and market pricing.

Cost plus takes the cost of producing a bottle of wine plus a sensible profit element for the producer and that becomes the price; by contrast, market pricing assesses what people are prepared to pay regardless of cost to produce.

In general, cost-plus works for everyday goods where supply is plentiful (if you are inefficient or take too high a profit, someone keener or bigger will undercut you) whilst market pricing works for luxury goods or very new products where demand outstrips the limited supplies.

It may cost a little more to produce a 1st growth Bordeaux than an unclassed growth in a neighbouring village, but the price for a Latour is set not by the cost of production but rather by what the market will pay for the wine.

In recent years, prices for top Bordeaux have been rising in line with the increase in Asian millionaires; that is, as a result of increased demand, and not because the wine has been getting any better. Some might argue that the wine was therefore previously undervalued - somewhat smugly if they happen to own some.

To me, it is mere price inflation - but then, I've never tried the wine. If you are lucky enough to have done so and you thought, for example, that it was worth significantly more than the £700 pounds plus that it now commands, then it was indeed a good value wine for you.

Back in the real world, bargain hunters can seek out the unfashionable to be more likely of finding value.

Some of my favourite wines are sherry and dry Riesling; they happen to be deeply unfashionable at the moment but make some superb wines.

The reasons why they are out of fashion are similar for both - historically, we saw a high number of poor examples in this country and the modern, good ones are still tainted by the perception of the old.

So much the better for anyone who likes them, then.

Another source of value wines is the bin-end - wine that is still good, but genuinely marked down just to sell it quickly. The seller's lost profit is my gain as a bargain hunter.

Bulk buys can also improve value - many wine merchants offer a case discount so if you like a wine enough to want 12 bottles, it is much cheaper to buy them all at once rather than individually. This is known as economies of scale - it takes just as long to sell 12 bottles as 1, so the merchant can offer a case discount to reflect the lower selling cost per unit.

In the area of wine, we may need to be careful what we wish for - mass-produced wines may be cheaper than they've ever been, (think New World chardie), but are they as thrilling and as good value as a lovingly crafted artisan wine costing just a little more ?

Of course, it's a completely personal decision.