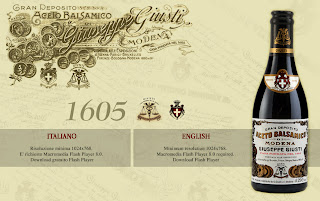 Balsamic vinegar is a bit like the noughties version of the prawn cocktail - suddenly very trendy and then rather passé.

Another analogy would be chicken; a product that started off high-end but then moved downmarket and became a bit everyday, coarse and unexciting in the process.

I went through my own "balsamic phase" in the early noughties after having it with bread and olive oil in restaurants, but then found the supermarket versions I tried rather disappointing.

At the Fine Wine Fair in London last year, however, one stall was offering small drops of a thick dark liquid to sample and after one mouthful, I remembered why I had liked it so much in the early days.

This balsamic vinegar from Giuseppe Giusti is aged in barrels for 12 years, giving it an intensity, dense richness and mellowness that is rather remarkable and unlike any basic supermarket own-label stuff.

Based in Modena, the same broad region of Italy that gave us Parma ham, Vermouth, hazelnut praline and bolognese sauce (as well as Ferrari and Lamborghini), the company can trace its history back to 1605 and was once a supplier to the erstwhile Italian monarchy.

With good, balanced sweetness and acidity, it is neither cloying nor overly tart and a few drops seem to go quite a long way.

We like to keep things simple, either for dipping bread as a starter or a few drops on a piece of steak (along with some shaved parmesan and rocket).

It won, apparently, 14 gold medals in the 19th century alone and has awards from competitions in Vienna, Paris, Brussels, Bologna and Modena.