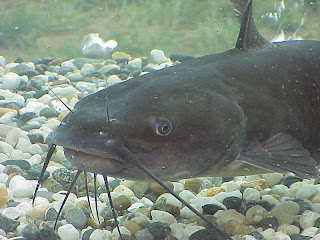 I recently wrote about how I was introduced to the bitter herbal spirit that is Unicum by a colleague - the restaurant we visited that day was called Serpenyos, on the picturesque and hilly Buda side of the city.

We sat outside in almost 40-degree heat, toasted with an iced glass of Unicum, before settling down to lunch and a discussion of the real business of my trip there.

It's a few years ago now since I went, but we subsequently went there on regular basis and the food was always well-made if unashamedly traditional and old-school.

One dish I particularly remember was harcsa paprika - catfish in a paprika sauce; it is a traditional Hungarian dish using freshwater catfish (Hungary is landlocked) with a sauce made from sour cream, paprika and tomatoes - it is a hearty, calorie-laden stew for peasant labourers with spice but no heat.

Catfish can grow up to several hundred kilos in weight, but the ones I used to buy from a giant fish tank in Budapest supermarkets were about 1kg - 2kgs.

I now make my own version at home in the UK as follows, substituting the more easily-available salmon for catfish. Other meaty white fish like monkfish would also be an option.

Match this with a wine with a bit of spice, not too much tannin and plenty of fruit acidity to cut through the heavy cream sauce; obviously Hungarian if you can get it, otherwise southern French red will do.

- wash and pat dry the salmon steaks; cut the salmon into equally sized pieces around 3cm square and season generously with salt and pepper, then set aside

- add the sour cream and passata, sliced red peppers, crushed garlic and seasoning and simmer gently until the sauce is thick and the peppers just cooked through (around 15 mins)

- add the fish to the sauce; simmer gently, stirring occasionally, until cooked (around 15 - 20 mins)

Serve with flat ribbon pasta such as fettucine.