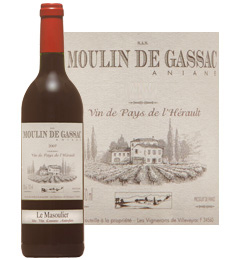 Hérault is a little-known department of southern France, part of of Languedoc-Roussillon, which tends to produce mostly cheap, bag-in-box-type wines.

Except that it is also home to cult producer Mas de Daumas Gassac whose flagship wines have been described by The Times as tasting like a first-growth Bodeaux Latour and which is frequently referred to as the Grand cru of the Languedoc.

According to the winery's website, the idea of producing wines came about more or less by accident - whilst searching for a family home in the Hérault hinterland in the early 1970s, Véronique and Aimé Guibert decided to buy an abandoned farmhouse nestling on the bend of a pine-bordered lane, but were unsure of what to do with the land.

It sounds idyllic, but it was the advice of Professor Henri Enjalbert who likened the slopes to the best soils in Burgundy’s Côtes d’Or and ventured that it would be quite possible to make a Grand Cru here (albeit adding that it would probably take 200 years for it to be recognized and accepted as such), that made the decision for them.

The Guiberts then planted un-cloned Cabernet Sauvignon vines propagated from cuttings taken in some of the great Bordeaux properties from the 1930s and 1940s and in 1978 produced their first vintage with some assistance from Professor Emile Peynaud, a renowned œnologue and advisor to several top Bordeaux Châteaux (including first-growth Margaux and Haut Brion).

Moulin de Gassac is the winery's range of second wines - wines that give you a glimpse of the main event but without the steep price or the wait. The range was launched in 1991 using existing vines from local hillsides.

At four years old, this 2006 Le Masoulier is ready for drinking now, but is sure to continue improving with age. With lots of ripe brambly fruit, the nose betrays its southern, warm-climate origins; on the palate, there is sweet ripe berry fruit, balanced with juicy acidity, prunes and plums, some woodsiness and spice plus smooth tannins and oaky vanilla.

Where this wine shows its superiority to any other well-made, fruity, southern French red, however, is not just in the complexity of the palate and length of the finish, but in the depth of the texture; it's not the easiest thing to put into words precisely, but it shows a mouthfilling complexity that other wines simply do not have.

Texture in a wine is something I first noticed with a rather special Bordeaux I had a year or so ago (reviewed here); I have been searching for it ever since and find it less often that I would like.

According to Philip Goodband MW, whom I asked about this, "Texture in red wines is, I would say, the result of great care and attention to all facets of winemaking plus a good year's weather which provides the motor for all activities. Canopy management, vine treatments, management of yield and green harvesting, deficit irrigation in warm regions, grape care at harvesting for phenolic ripeness not just sugar! Above all the tannin management including length of maceration and oak regime" - simple then, but not easy.

Grape varieties are not specified precisely, but include Syrah, Grenache, Carignan plus lesser-known others.