Some of the first people I spoke with at the recent Fine Wine Fair in Chelsea were at the somewhat clumsily-named Mo-Rhe-Na stand.

Mo-Rhe-Na is a trade export body representing wine estates, their cellars and great vineyards from all mayor German wine growing regions and takes its name from the Mo(sel), Rhe(in) and Na(he) regions.

Starting with the Riesling, it was a Spaetlese, meaning literally late-harvested and from the Pfalz, a warm, sunny region, albeit not the most southerly in Germany.


Despite the spaetlese tag and the German tendency towards off-dry wines, this was fully dry, but rich and full-bodied, yet also light enough to consider drinking without food. Well-made, long and with a balanced finish, to me it had hints of botrytis and although I was assured there was none, I was also told that I was not the only person to have noted botrytis. 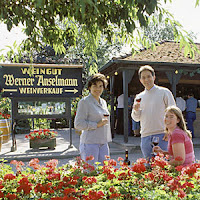 Made by the Anselmann family who can trace their ancestry back to 1126, this is a thoroughly modern wine with manual harvesting and fermentation in stainless steel to retain freshness. Just the sort of thing that next-door rivals the Austrians have been doing for a generation now.

If imitation is the sincerest form of flattery, the Austrians must be reciprocating the flattery as they gave this a Gold Medal at the 2009 AWC in Vienna.

The second wine, a red, had a nose of strawberries and raspberries, and was very smooth and rich. Low in tannins it would make an easy, light summer red - if only the summers were more predictable in this country. It was certainly enjoyable, but with a guide price of £12 - £15 it is unlikely to win any awards for value.

Email ThisBlogThis!Share to TwitterShare to FacebookShare to Pinterest
Labels: Germany