For a while, I was a regular visitor to Romania on business. I can't say it's my favourite place in Eastern Europe but Bucharest was once described as the Paris of the East with tree-lined boulevards and even has its own Arc de Triomphe before the baby-faced megalomaniac dictator Ceausescu swept aside huge swathes of the city to replace them with vast squares and the white elephant that is the House of the People, the world's largest civilian building.

If you can judge a people by how they drive, then there is definitely something eastern, chaotic and idiosyncratic about the denizens of Bucharest. Shortly after one visit there, I went on to Istanbul and found it far more European in feel than Bucharest.

However, my enforced stay in Romania was good for one thing at least - I learnt that Romanian wines are actually rather good indeed. 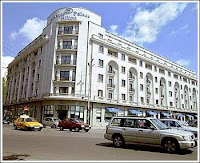 I was staying at the Athénée Palace (possibly Europe's most notorious den of spies in the years leading up to the Second World War, and only slightly less so during the Cold War) with a group of colleagues and we decided to play safe and eat at the hotel restaurant - we ordered a bottle of something local and found it surprisingly good. So we ordered a few more ...

Over the next few weeks, the quality of the wines in the restaurant as well as the food (especially the steaks) became one of the things I looked forward to about my trips there.

In very simple terms, Romanians are a broadly Latin people, being a mixture of Roman soldiers from the days of the empire and the local Dacian population. Although the local religion is Orthodox Christianity and they are geographically surrounded by Slavs and Hungarians, it helps to think of them in terms of their nearest linguistic neighbours, the French, Italians and Spanish.

Certainly this was true for the wines which were surprisingly well-made, in an approachable, fruit-driven yet still noticeably old-world and food-friendly style - rather like, say, southern France or inland Spain; the Rieslings I particularly remember being well-structured, well-balanced and very drinkable.

Of the reds, my two favourites were both from Villa Zorilor. The first, called Swallowtail, is made from the indigenous Feteasca Negra grape from the Dealu Mare region. It is packed with soft, supple mouthfilling tannins and has rich flavours of dark bramble fruit, black cherries, prunes and hints of tobacco, woodsmoke and coffee. As well as being delicious, it is also a perfect match for steak.

The second, Merlot Prince Matei, had spicy prune and plum fruit, a great depth of flavour, good balance and length.

If you happen to be in Bucharest, both are available from Vinexpert:

On a more recent visit, I found the wines to be just as good, though noticeably more expensive since EU accession, which is a pity since they are somewhat obscure in most people's perception and keen pricing has to be the first step to wider acceptance.

Email ThisBlogThis!Share to TwitterShare to FacebookShare to Pinterest
Labels: Romania