I used to live in in Austria and later regularly travelled to Vienna on business. The city's beautiful and historic first district is like a huge, UNESCO-protected, pedestrianised, open-air museum with gilded marble churches, imperial palaces and the vast Stephansdom cathedral - as well as a selection of excellent restaurants and wine bars that I have written about previously.

However, there's more to Austria than Vienna and on a couple of occasions, I borrowed a company car and made the short drive up the autobahn to Dürnstein in the Wachau Valley (also UNESCO-protected) to stay at the Hotel Schloß Dürnstein. 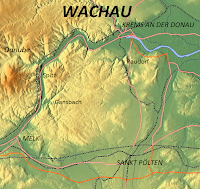 The Wachau Valley is a meandering stretch of the Danube between Melk and Krems with steep terraces on either side where some of Austria's greatest Rieslings and Grüner Veltliners are grown by the likes of Prager, Knoll and the co-operative, Domäne Wachau. It is also an area of great natural beauty as well as home to many pretty little villages.

Dürnstein is perhaps the prettiest of these with a short cobbled main street (an underpass takes most traffic well away from the village centre) along which are to be found quaint buildings between which is to be found an occasional glimpse either down to the river on one side or up to the vineyards on the other.

High up above the vineyards lies a ruined castle where Richard the Lionheart was held prisoner from 1192 to 1194 and from where there is a breathtaking view of the village, with a church spire said to be the prettiest in Austria.

Such, then, is the setting for the Hotel Schloß Dürnstein (schloss means "castle", but here it is more in the style of a chateau - a grand and extensive country house) overlooking a sheer drop down to the river on one side.

The hotel is now a mix of old-fashioned, central European charm, gemütlichkeit (cosiness) and luxury with all  the modern trappings such as a swimming pool and sauna.

The building was originally constructed as a magnificent renaissance structure in 1630 and the castle belonged for centuries to the Counts of Starhemberg, one of the oldest houses of Austria. Acquired from them in 1937 by Raimund Thiery, it was later converted into a hotel with the old features maintained and preserved and became one of the first non-French members of the Relais & Chateaux association of luxury hotels.

Now almost 400 years old, it retains a grand and individualistic old-world charm which I immediately found very different to the usual anonymous business chain hotels I tended to use in central Vienna; the rooms are furnished with antiques and have a view either of the fortress, the river or the village of Dürnstein. 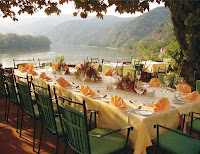 Perhaps the most pleasant aspect to a stay, in the summer at least, is to have dinner on the terrace where on one memorable visit I had a delicious roast lamb with rosemary, as part of a four-course meal, and a Riesling from the hotel's own vineyard (made by Toni Boden of the nearby Prager winery) whilst watching the sun set down the valley.

I followed this with a quick stroll around the village and decided that business travel has its perks every now and then.

A two-night package at the Hotel Schloß Dürnstein costs from €556 for a standard double room.

Email ThisBlogThis!Share to TwitterShare to FacebookShare to Pinterest
Labels: Austria, General / other