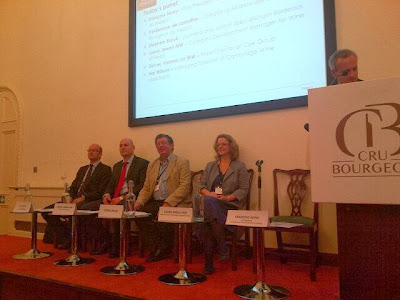 A review of a panel discussion on Crus Bourgeois

Stephen Brook, who led the panel, started with a brief introduction to Crus Bourgeois:

Covers wines from one of the 8 Medoc appellations; must be a blend of any 2 permitted grapes
Assessed via an annual competition - entry is voluntary not obligatory
Wines are tasted double-blind; the judges are not told about what score is needed to gain Cru Bourgeois status

Francois Nony then talked about the advantages of Crus Bourgeois

Quality is comparable to a minor classed growth, but with a focus on drinkability

2011 was complicated vintage, heterogeneous - wet, with a late Indian summer that was not warm; also hail.

The previous Crus Bourgeois system had over the years fallen into disrepute, was overhauled in 2001 with higher standards and many thrown out - but producers became litigious and the system collapsed in 2007, so was revised again into its current format with an annual competition.

Laura - Crus Bourgeois is not esp relevant to many of Tesco's customers; the company sells 1 in 4 bottles in the UK; France is holding its share and Bdx gaining some momentum. Tesco don't do anything with Crus Bourgeois instore but do use it to help educate consumers via Tesco's wine community, the wine fairs, and the magazine (distribution is 500k)

Dirceu - consumers have now lost touch with what Crus Bourgeois is; Coe have 6 wines selected as good value Bordeaux, not specifically because of being Crus Bourgeois they have little direct contact with customers

Hal - a fan of Medoc personally, his customers have long memories but not deep enough pockets for top Bordeaux, so Crus Bourgeois is the answer. CWM work with c60 producers, of whom 48 are included in Crus Bourgeois. One caveat, it's a club, but needs to be wide to have full validity.

Crus Bourgeois is perfect for CWM profile - price, range, ability to work with negociants and merchants; he can make money and stock the wines with confidence over the years "vinous nirvana".

Well-promoted via Decanter tastings and the Bordeaux Council.

The timing of the 2008 overhaul helped introduce Crus Bourgeois to a new generation of drinkers; the ripeness of 2009/10 also made the transition from New World wines easier. Crus Bourgeois was 50% of CWM's en primeur volume.

The UK is one of top 3 markets for investment amongst Crus Bourgeois members - it is the most competitive market, but it is birthplace of claret.

Stephen Brook observed that Crus Bourgeois are sensibly priced whilst Crus Classes are insanely priced and asked the panel to comment on pricing:

Laura: Tesco bought Crus Bourgeois en primeur and brought over in cases of 6 (not 12) for affordability.

Leigh Claridge from Maison Sichel (from the audience): the '11s are ready for drinking now, so we can wait for 10s and 09s to mature. He has only been asked for a Cru Bourgeois wine 5 times in his career; like biodynamic or organic, people just want value for money, so Crus Bourgeois status is just a nice to have.

There is now a shortage of stock in Bordeaux chateaux: 2000 - 2010 were all good vintages, but since 2010, the vintages have been weak, so people are buying older wines over the new, and this plays to strength of Crus Bourgeois as ready-to-drink now.

Francois Nony observed that the UK is only market that likes older wines and that he would take this message back to his members who cannot afford to release selectively over time to maintain demand (as the Crus Classes do).

Question: could Crus Bourgeois system be expanded outside the Medoc?

Francois replied that it is the only system that has worked in improving quality - CIVB would like to do so, but no prospect of it happening; he would be happy to help transfer know-how but could not cope with the increased volume from expansion.