Where the New World Meets the Old; Francois Lurton Dinner 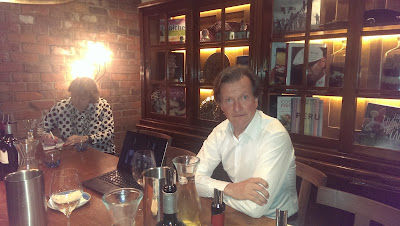 Brash and iconoclastic, ripe and fruit-forward; the New World has energy and chutzpah aplenty.

What it also needs sometimes is a bit more of a European spirit - an elusive, restrained, less-is-more philosophy.

Francois Lurton, of the Bordeaux Lurton dynasty, has vineyards all over the globe, but on this evening opted to show wines from his twenty years in Chile and Argentina.

If Chile were a rock band, it would be Guns n Roses; too much talent squandered.

I'm not sure I know what Argentina stands for - its rock star analogy would have to be the talented-yet-mercurial serial underachiever, Jeff Beck.

As a reference point, think more Languedoc than South America.

The Chilean wines were softer, plumper and easier drinking; the Argentinean wines showed more grip and firmness which, says Francois, is a mark of their terroir.

The wines are available from Condor and Roberson.