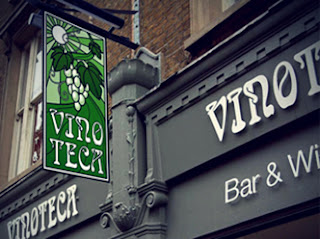 After the Masterclass with Voyager Estate Head of Winemaking and Viticulture, Steve James, at Vinoteca Farringdon we assembled journos settled down to dinner with more of the wines.

Voyager Estate is based in Margaret River, Western Australia and produces food-friendly wines in a distinctly European style thanks to the cooling influence of the Southern Ocean.

My general principle at restaurants is to choose something that I would not normally have at home - so I rejected the squash soup and cured meat options in favour of a fish starter.

A plate of salamis was brought round for sampling as a simple amuse bouche and the thin slices were sweet, intense and meaty; we matched this with a glass of Voyager's white Bordeaux blend of Sauvignon and Semillon. Crisp, aromatic and precise, it had the body and structure to cut through the meat.

My smoked mackerel salad came as mashed fish with chopped celery and horseradish - the style was a touch rustic (no garnish, just a dollop of salad of the plate) but it was absolutely delicious and my choice of 2009 Chardonnay with its linear acidity, depth of flavour and toastiness proved a perfect match.

My main of partridge came on a bed of creamy celeriac puree with beet and spinach which provided a sweet, earthy contrast. The fowl itself was wonderfully tasty and perfectly cooked, but came whole and proved a little fiddly to eat in polite company.

I matched this with the 2009 Shiraz which, inexplicably, showed much better with the food than during the Masterclass - the dark fruit, pepperiness and good acidity stood up to the earthy-gamey flavours and cut through the creamy puree.

Dessert was creme brulee - the custard perfectly cooked, creamy, sweet and vanillary; the topping even and crunchy if slightly over-brulee-ed in a couple of places. 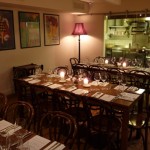 This is a dish that calls out for a dessert wine - a fresh TBA with the sweetness to match and some botrytis complexity.

Sadly, Steve explained that Voyager Estate does not do a dessert wine as the conditions needed for botrytis (generally, morning mists) do not occur and, left on the vines, the grapes succumb to ordinary rot rather than the noble variety needed.