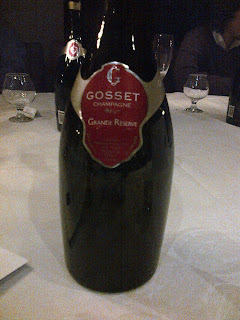 Gosset is the oldest wine house in Champagne and its existence pre-dates even the discovery of the Champagne method for making sparkling wines.

Based in Aÿ, the original vineyards have been broken up and passed on through centuries of inter-generational transfer and Gosset now buys in almost all of its grapes as must from around 200 growers in Champagne.

From its vineyards, it makes a small amount of still Pinot Noir which is used in the rosé fizz and when there is an occasional surplus, sold locally in Epernay and Reims.

A relatively small producer, Gosset makes around 1m bottles per year in total - if that sounds like a lot, as Gosset's Global Export Director, Philippe Manfredini pointed out, total Champagne production is over 300m bottles, so it represents under 0.3%.

The UK is one of Gosset's larger markets and, over a dinner hosted by Cambridge's Hotel du Vin, I sat next to and chatted with Philippe.

Traditionally used for podium celebrations and toasting the happy couple, Champagne is a much more versatile food wine than its purely celebratory reputation might suggest - and Chef Jonathan Dean had matched four courses to different Champagnes from Gosset to highlight its versatility.

We assembled initially in the hotel's cosy library where Gosset's Brut Excellence NV was served from magnums on ice with canapes including seared tuna slices and mozzarella with pesto and tomato.

Crisp and fresh on first pouring, with a little air and warmth, a more food-friendly rasp of cidery, sour-hay tartness emerged on the palate.

With everyone assembled, including food blogger Heidi Sladen who had won her place there through my blog competition, we then moved through to the dining room.

Our starter was a bouchee of sauteed crayfish and sweetbread with julienne of vegetables - essentially a large and rather posh vol-au-vent - matched with the NV Gosset Grande Reserve.

The wine felt fuller and more elegant than the Brut Excellence, and whilst all the individual elements of the bouchee were very good, the pastry-to-filler ratio seemed high and it felt in need of a bit more sauce.

With the exclusion of the first wine, the Brut Excellence, all the Gosset Champagnes are served in old-fashioned "traditional" bottles with no malolactic fermentation.

Next was a take on an Alsatian dish - pork medallion with fresh choucroute and Champagne jus.

Alsace is not far to the east of Champagne and to me there is a certain Central European-tinged family-resemblance between Champagne, Alsace, Burgundy and Jura - one feels it in the cultures, the food and wines, the architecture.

The pork was well-flavoured and perfectly cooked, the choucroute a crisp, slightly tart accompaniment rather than the traditional steaming pile. The highlight of the dish was the delicious jus and some perfectly matched wilted spinach.

The wine to match this dish was the NV Gosset Grand Rose - a pale red in colour, it stood up to the food well and felt well-structured and precise. 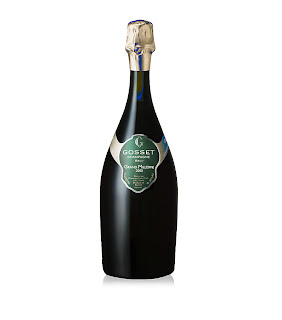 With three delicious cheeses from the region, we were served what was for me the best wine of the evening, a 2000 Grand Millesime.

Taut, precise and structured, it really was quite wonderful and went well with the cheeses.

The 2000 is the current vintage in the UK and whilst drinking well now, still has plenty of life left in it - the 2004 will be the next vintage and Philippe explained with a wink that it will repay some cellaring so we should buy two cases and only drink one straight away.

The final course was a Tarte au sucre with Champagne Granite - this came with a local twist, a Biscuit Rose de Reims which is a speciality of Reims, capital of Champagne which I opted to match with a glass of Cognac Fontpinot Grande Champagne XO.

The Cognac is from Frapin which is owned by the same family as Gosset. With rich cooked fruit on the nose and a hint of nail polish, it was refreshing, smooth and long on the palate.

By contrast, Philippe explained, spirits are sterile in the bottle and do not improve with ageing, so having bought a bottle of the Frapin, we should drink it straight away.
________

The event had proved very popular indeed with tickets sold out well in advance - at the end of the evening, I chatted with a group of people and found they were having a work do there.

I have been to plenty of work dos myself, but never anything quite as smart as a Champagne dinner so I concluded they must either all be high fliers or have a very generous employer.

With that thought, I left to head home whilst they made their way down to the Hotel's quirky and cosy cellar bar to carry on the evening's entertainment.

By contrast, Philippe had told me that, due to a mix-up, he would have to drive over to Hitchin to sleep on someone's floor before flying off to his next global destination.

And as for Heidi, she has written up her take on the evening here, and clearly enjoyed it so much that she also went back a few days later to try out the Le Brunch menu.

Of all the Champagnes we tried that evening, my favourite was the Millesime 2000 for its precision and structure; the Brut Excellence and Special Reserve (and the Frapin Cognac) are available in Cambridge from Bacchanalia.

I attended the dinner as a guest of the hotel.