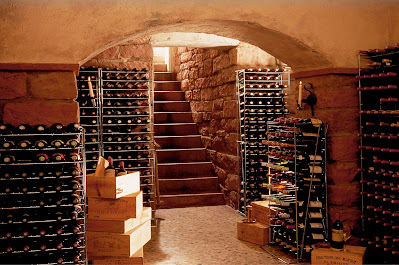 Non-wine friends who know of my side-hobby occasionally observe: oh, you must have an amazing wine cellar!

The reality is that modern townhouses are not really conducive to storing wine reliably and given that even amateur-league writers get enough invitations, masterclasses and samples to support a mixed diet of interesting wines on a regular basis, there is little need to start a collection at home.

Then, a year ago, lockdown happened; all tastings were completely cancelled and no-one had any samples to send out.

Even worse, there was no reliable prospect of popping across to France for a couple of weeks and returning with a bootful of inexpensive bottles.

I had to start actually buying wine in this country.

This was a new experience, but I took it in my stride.

A year on and I now have a decent instant-cellar, stored under the stairs in boxes and under blankets to keep out heat and light.

With zoom tastings coming on stream to replace in-person events and no actual guests to entertain, these wines may now end up staying there for a while; this will be OK for some, but others are at a peak now and have not got much further to go.

A good wine cellar should have a range of wines at every stage of maturity (ready for early drinking, maturing and at peak) in a range of styles from fizz to dessert via white, rosé and red.

The cellar was built up in a somewhat ad hoc fashion; I did not set out from the start to create it as such. Rather, it evolved naturally as I found inexpensive wines I liked on special offer and decided to buy them in quantity.

The cellar is big on European classics, with the occasional curve-ball, and also big on mature wines.

There are probably around 100+ bottles left now and as I am no longer acquiring faster than drinking, there is roughly a year's consumption in there assuming a shared bottle every Friday and Saturday night.

All my purchases have been opportunistic; a tweet here or FB mention there by someone in the trade sees me heading off from my desk during wfh lunchtime to check out whatever is being recommended. Ironically, lockdown and working from home has made it possible to keep an eye on social media and pop out during the day in a way that would not be possible if I were still commuting daily into London.

for bringing all these to my attention.

Everyone has a different set of preferences; by now, I know who in the trade shares my classical, old-school European, cool-climate palate-style and whose recommendations I can expect to like.

If you like Big New World wine with lots of ripe up-front fruit and alcohol, you won't find much of that here, but that's not to say you cannot get reliable recommendations; I just cannot tell you where to find them.

I also tend not to bother with trophy wines - the big names that everyone knows and approves of, which carry a hefty price premium for their quality and lineage; I rather prefer to go off the beaten track and look for the quirky and underpriced.

I also don't particularly do the edgy natural wine thing, orange wines - except this superb one - or hipster pale, Alpine style, delicate reds from obscure grapes.

In late winter 2020, when we were still commuting and working in offices, the Co-op started marking down some interesting wines and I had done a tour of local branches for half-price English pink fizz, Vouvray, mature Mosel Riesling and a few others with a view to laying some down.

I've never been able to get excited about red Burgundy, despite several attempts. It's expensive yet meh, in my book, so discounted mature red Burgundy was a chance to see if I could establish what all the fuss is about.

Cambridge Wine Merchants picked up several pallets of mature red Burgundy destined for the now-closed restaurant trade and I bought around half-a-dozen of various reds at 50% off standard price off-trade price. I liked some better than others and have a few left, but never quite went back for more of the same.

I did, however, buy several bottles of various whites - which I prefer. 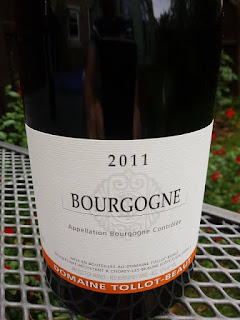 Inexpensive Bordeaux - from a Good Year

A Facebook post from Richard Bampfield alerted me to some on-offer red Bordeaux at Lidl. 2016 is the year to lay down and is under £7 a bottle when on promotion, so I bought a mixture of these plus some 2017s for earlier drinking.

My local M&S has been selling off various own-label darker sherries from time to time - always under a fiver, sometimes under £2 for Cream, PX, Amontillado and Oloroso. 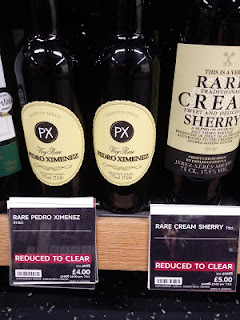 Nick Oakley dropped a note onto FB offering some ruby port uncovered during a stock-take at half list price - minimum order of a dozen with courier at cost, so I took one of those and handed a few out to friends and neighbours at Christmas.

Mature Rhône is not really a thing as it tends to get consumed when young, but this half-price ex-restaurant stock demanded to be bought by the caseload. So I did. 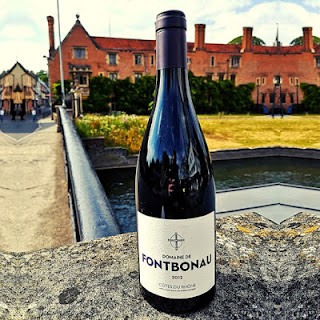 I don't know Italy as well as I'd like to; Nayan Gowda brought this Dolcetto at Cambridge Wine to my attention and the Bridge Street staff suggested these two Ricossa wines were a bargain worth trying.

The oldest wine in my newly-established cellar is a 20yo Australian (off)-dry botrytized Semillon. I thought the first case was good value at £10 per bottle. Then I bought a second case further discounted to £6 per bottle.

Whilst I was in there, I also noticed some half-price mature Bordeaux and Rioja which Tom the manager said were good. He seemed like a reliable guy, so I picked up a case of those. 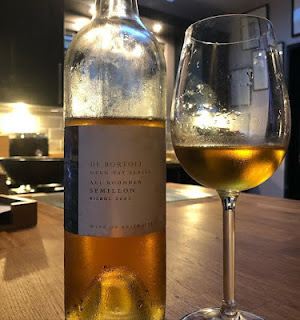 Lidl has been a great source of easy-drinking well-made younger wines: a case of Pecorino for £3:50 on special offer; Cava contentiously at the same price, a 5yo Rioja for a fiver and a few end-of-range markdowns, including a brace of Beaujolais.

And not forgetting the other German discounter, Aldi. Charles Metcalfe gave a thumbs up to a fruited and easy-drinking Portuguese blend for a fiver, so I cycled to the other side of Cambridge and filled my rucksack with those.

I know people who spend more than that on a wine just to put in the cooking. 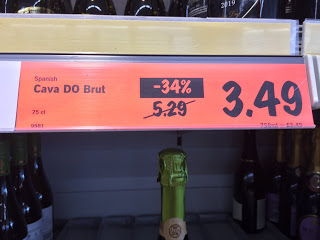 Buying interesting, mature wines at below cost-price requires a bit of effort, research and the ability to follow-up on leads quickly. It also helps if you are not too attached to any one wine area or style and are willing to try something new.
There are plenty of wine merchants who will help you build a conventional wine cellar with professional storage that will bring much enjoyment. I happen to prefer the novelty of doing things unconventionally.