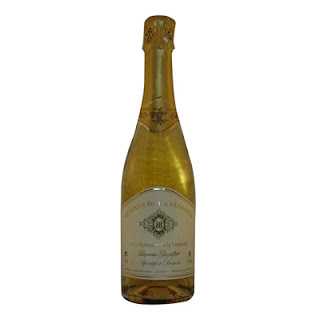 Celine Bridier recently contacted me asking if I would be interested in reviewing her Pineau de Charentes - an unusual oaked, semi-sweet sparkling wine with 1/3rd Cognac - added made by her family at the picturesque Domaine de la Vennerie in Reparsac, a little way north of Bordeaux in France. 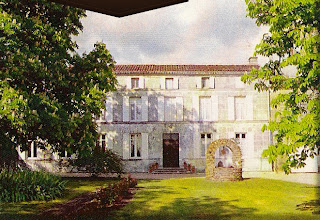 After a couple of weeks' delay whilst she had a baby, she stopped by, looking extremely glamorous, to drop off a bottle and as we had visitors that weekend, it seemed like a good occasion to open it along with a pear and almond cake which proved to be an inspired match.

A golden straw colour in the glass, it is lightly sparkling and has a floral nose, with butterscotch and acacia honey aromas, as well as some more unusual notes - hints of rotting hay sourness and a touch of camping gas which are mild enough to be not unpleasant.

On the palate, it feels rounded and lively with a fine mousse and sweet vanilla.

There is a buttery texture from new oak, aromas of almonds and pear drops and some cooked mixed fruit.

There is a long, warming finish of vanillary oak and cooked fruit.

At an intellectual level, it is one of the strangest wines I have ever had, with so many different things that would not normally go together - two or three, perhaps yes, but not six or seven - new oak, old oak, sweetness, fizz, spirit and table wine.

And yet at the level of simple enjoyment, it really works - not least due to all the different elements being in balance - and is a very lovely and enjoyable wine; definitely unusual at first but one that I could easily come to love.

The label suggests serving as an aperitif or dessert wine - given the oak, sweetness and spirit, I think it works better at the end of a meal than at the beginning, but it would work well with a rich goose-liver pate starter.

Researching on Wikipedia, I discover that Pineau des Charentes, a regional French aperitif made mainly in the département of Charente, is a fortified wine made from a blend of lightly fermented grape must and Cognac eau-de-vie.

According to legend, during the harvest of 1589, a winemaker accidentally added grape must into a barrel that he believed was empty but in fact contained eau de vie. The mixture was duly returned to the cellars for fermentation. A few years later, the barrel was retrieved and was found to contain the drink that is now associated with the region.

For white pineau, such as this, the dominant grape varieties are Ugni Blanc, Folle Blanche and Colombard, with occasional Sémillon, Sauvignon Blanc and Montils. The mixture is aged for at least 18 months, including a minimum of 8 months in oak barrels, whilst finer varieties are aged for over 5 years in barrel, and often for several decades.

Celine herself explains that her sparkling pineau "is often incorrectly known as pineau champagnisé. The production method is rigidly adhered to five year old pineau is gasified for bottling. The age of the drink reduces the sweetness, and the addition of carbon dioxide allows the natural flavours to develop. Fantastic as Aperitif or with desserts. Serve very chilled."

She adds "Trust me you will love it." And we certainly did.

The product is not currently distributed in the UK except on a small scale by Celine herself who can be found on Twitter @celinebridier.