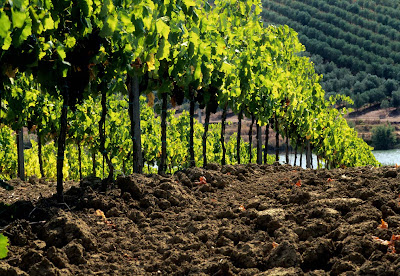 A while ago, Guido Scelso sent me a couple of wines to review for his business, Outis. The company, which has just launched, specialises in selling the wines of Sicily and southern Italy via the Internet in the UK.

With a list of mainly organic and bio-dynamic wines priced from £10 to £25 and beyond, these boutique wines are clearly not set to compete with either the supermarkets or Internet retailers such as Laithwaites and Naked Wines.

Sicily is a country I know little about oenologically, other than that its reputation has been increasing over the last decade or so as this article from Jancis Robinson in 2002, entitled "Sicily - Italy's New California" demonstrates - here.

Set roughly in the middle of the Mediterranean, historically Sicily was a Greek colony of great political significance and later had Germanic, Byzantine, Arab and Norman eras before unification with next-door Italy.

The first of the wines I tried was this biodynamic Trebbiano. Italy's most widely-planted grape variety with a not entirely undeserved reputation as producing its dullest and most neutral wine, it is also capable of producing interesting wines when well made.

On pouring into the decanter, it is a dark gold / straw colour (indicating both age and oaking), but still bright.

There is some oldish oak on the nose and with time it becomes richer, with just a touch of toastiness and a distinct, briny tang of seaside, sand and shells.

The saltiness continues on the palate which is rounded and mouthfilling with smooth, well-integrated tannins, with some aged characteristics of old books and antique leather around the edges.

The lively acidity is lemony with a touch of pineapple sweetness whilst the finish is long, balanced and weighty.

The lack of up-front fruit and level of oxidisation are somewhat old-school, but it is not overdone and the acidity remains fresh.

Food matches would be lighter game, such as a partridge or smoked salmon.

The second wine was a red from the Nerello Mascalese grape which is native to Sicily and named after the Mascari plain where it is thought to have originated; it is typically used for blending and recent research has suggested it may well be a cross of Sangiovese with another, as yet unidentified, variety.

On pouring, the wine was a surprisingly pale, reddish colour with a nose of red berries, some undergrowth, chestnut mushrooms and oak.

On the palate it feels vibrant and shows red berry fruit, sour cherries and a hint of pepper, spice and liquorice.

There is a pleasing touch of mid-palate sweetness and some gentle tannic grip on the finish.

The acidity is prominent, mouthfilling, focused and linear.

Rather like the oaked Trebbiano, it feels somewhat Burgundian (it is priced at Burgundian levels, too) and would also match with typical Burgundian fare such as pheasant or beef bourguignon.

As well as wines, Outis are enthusiastic promoters of Sicily generally and also offer wine tours the this historic and much-fought-over island with five world heritage sites and an array of archaeological remains from various eras.