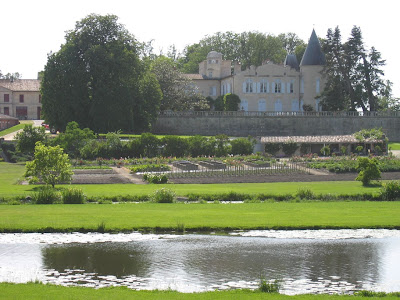 Bordeaux is perhaps the most famous wine region in the world - and with good reason; its First Growth chateaux produce some of the most expensive wines in the world (with prices for the 2010 vintage rising dramatically due, in part, to the effect of China) as well as perhaps the most famous sweet wine, Yquem, with top Bordeaux now almost more of an investment medium than a mere fermented beverage.

Moreover, with a viticultural history dating back almost 2,000 years, Bordeaux is the spiritual home of such noble grapes as Merlot, Cabernets Sauvignon and Franc, Sauvignon Blanc and Sémillon.

Red Bordeaux, made generally from a blend of Cabernet Sauvignon and Merlot (sometimes with smaller amounts of other varieties) is typically tough and chewy in its youth, but matures into a wine that gives a blast of blackcurrant fruit with aromas of pencil shavings, tobacco and resin - with generally high tannins and acidity, it is very much a food wine and traditionally matches with plain roast dark meat, such as beef.

All of this makes the Asian-billionaire fascination with young Bordeaux all the more surprising, as drinking it young with the strong, hot flavours of oriental food is as sure a way as any to overpower the wine and make it seem thin, bitter and dull.

The answer lies in both the rarity value and relative ephemerality of Bordeaux (say compared diamonds, gold or yachts) as well as the Asian tradition of gift-giving and obsession with overt demonstrations of status) - a gross oversimplification, of course, but not a bad one as these things go.

Away from the over-priced, over-hyped, under-aged Bordeaux, the region is home to a further 8,500-plus chateaux producing over 700m bottles of wine every year - around the same volume as the whole of Australia.

And as Anthony Stockbridge, a CIVB-accredited wine educator and therefore something of a Bordeaux specialist, pointed out, not all good Bordeaux has to cost a small fortune.

There are over 60 appellations in Bordeaux (see map), but the main distinction - for the reds that make up almost 90% of production - is between the right bank where Merlot dominates and the left bank where mainly Cabernet Sauvignon is grown.

However, Anthony started his presentation with two white blends. In Bordeaux, the whites pretty much have the status of also-rans amongst the very top wines but in the real world of wines under a tenner, they are increasingly gaining in quality and reputation.

The first from Château Bel Air, Perponcher Réserve was a 2009 Entre Deux Mers, made from 60% Sauvignon Blanc, 20% Sémillon and 20% Muscadelle (The Wine Society, £7.95). This had an unusual amount of Muscadelle in the blend but was fresh and dry and went well with Brie.

The second white, a Château Dubois Challon Fleur Amandine 2009 Bordeaux was 45% Sémillon, 50% Sauvignon and 5% Muscadelle (The Wine Society, £9.50); this was a more typical blend, barrel fermented and with the skins left in contact with the wine.

The wine spends around three months in oak casks, giving it a distinctive, oaked feel, although very different and more subtle than an oaked Chardonnay, for example. The palate showed ripe tropical fruit with a sweet almond finish and it proved the favourite of the two whites.

Moving on to the reds, we started with a Château La Grave de Bertin, 2009 - a Bordeaux Supérieur (meaning the alcohol content is slightly higher from riper - and theoretically better grapes) 70% Merlot, 20% Cabernet Sauvignon and 10% Cabernet Franc (The Wine Society, £7.25)

It was a very young wine but the high proportion of means it is low in tannins, making it a good everyday Bordeaux. The palate shows cherries, red fruit and plums and it was matched with cheddar to break through the ‘youthful’ taste.

2005 was one of the great years for Bordeaux and this wine needs a bit more time to mature fully, but is start to drink well now, with a soft and smooth nose, a good level of acidity and lots of fruit, it feels elegant, soft and velvety, with lowish tannins that make it a better match for lamb than the more traditional beef.

It will improve for a few more years and keep for another 10.

The nose on this wine was quite different nose to the previous one, with cassis and leather from the Cab. Anthony described this as a good, middle-of-the-road wine with good structure and tannins and it was very popular on the night.

Moving further back in time, the next wine was a Château La Gurgue 2001 from Margaux, a Cru Bourgeois with an undisclosed blend, but dominated by Cabernet Sauvignon (Lay & Wheeler, £19.00)

This was really lovely wine with finesse and secondary aromas of liquorice, pencil lead and spices from aging and a complex, velvety palate.

This was another absolutely wonderful wine with floral notes of violets on the nose and pine needles, cedar, spice on the palate; it is still relatively youthful and another two or three years' aging will soften the tannins.

The final wine of the evening was a sweet Château Cantegril Sauternes, made from 91% Sémillon and 9% Sauvignon Blanc (The Wine Society, £20.00).

With a complex nose and palate of honey, barley sugar, spicy apple, candied fruit, orange peel it was delicious and matched superbly with Roquefort.

With prices for 2010 Bordeaux first growths reaching astronomical levels, and moreover the wines not ready for drinking for a good 10 or so years, the event was a timely reminder that there is much better value to be had in wines of slightly lesser reputation from older vintages which are closer to being ready to drink now.

Main image, Château Lafite-Rothschild (listed first in the 1855 Classification - although whether this was actually ordered by rank remains controversial, it continues to achieve the highest prices of the Médoc first growths): http://www.interestinwine.co.uk/images/categories/Lafite_Rothschild/lafite_10.jpg