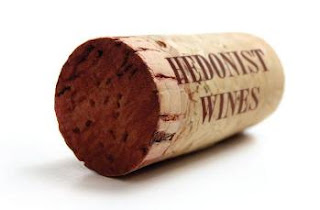 At the weekend, I was invited by Anthony Jenkins of Hedonist Wines to drop by for an informal wine tasting with a few of his friends.

I tried a couple of his wines a few weeks ago and wrote them up here; fellow Cambridge blogger Davy Kurniawan, writing as Vinoremus, also included a couple at one of his tastings (here), so I was keen to see what the rest of the range would be like.

It proved to be as much a social event as a serious wine tasting, which was fine by me, as Anthony has a good mix of friends and we met some very interesting people.

However, that also meant that the wines were opened and poured immediately with no aeration and we did not use tasting glasses, so I feel some of the wines here might have shown better under different circumstances.

We started with a Menetou-Salon; a new appellation for me, it lies in France's northerly Loire region and might be categorised as a lesser / better value Sancerre - rather like Touraine, then.

Crisp and smokey, with herbaceous aromas, a minerally finish and rounded acidity, it was a textbook Loire Sauvignon and would work well as either an aperitif or with classic food matches such as goat's cheese or white fish in a herby broth.

This is the entry-level wine for this property and was well-made and sensible; Hedonist also sells the estate's top wine and Davy tweeted me a few weeks back to say how impressed he was with it.

Next up was a white Burgundy from Domaine Joussier in the Côte Chalonnaise. More neutral than the previous wine, it had focused, lemony, linear acidity and a creamy, rounded palate.

Like the Menetou-Salon, it felt well-made and fresh, but a little elusive - either it needs a bit of air to open up, or it is rather a neutral wine.

The last of the whites was a Caecus white Rioja from the Viura grape; a relatively unusual wine, it was perhaps the most interesting white for that reason. Initial impressions on the palate were of lemon sherbet, with rounded lemony acidity, a touch of oak and a good depth of flavour.

Again, it felt clean, fresh and well-made and at this point, I felt I could discern something of a house style for Hedonist's whites - well-made, fresh and clean, they impress more on a structural level than through a complexity of fruit aromas.

As timeless yet familiar as a Beatles melody, they are the type of wines you could settle down with for a life of cerebral domesticity rather than, say, having a quick snog with at the disco.

By contrast, the first red was more outgoing and likely to want to show you a good time - a light, unoaked Rioja joven again from Caecus, it was an easy quaffing mix of ripe prunes, plummy fruit, liquorice and refreshing juicy acidity with a touch of tannic buzz - tasted blind, I would have guessed this as a southern French red blend from the Languedoc.

The second red was a Burgundy from Domaine Joussier in Mercurey and was also rather light - pale in the glass, it had a good, typical Pinot nose of red berry fruit, mushrooms and a touch of truffleyness with some hints of vanilla.

It had a lovely soft texture, but started to fade rather sooner than I would have liked, but this may change with a bit of air and in any case £13 for even a half-decent red Burgundy is very reasonable.

Anthony explained that he is struggling to find an approach with red Burgundy that he is happy with - and I am not surprised. Red Burgundy is such a minefield of a specialist area that it is almost an entire subject in itself.

The next wine was one that I reviewed earlier - the Rioja crianza from Caecus. There is a more detailed review here, but it showed the same good berry fruit, ripe cherries and lovely acidity that I remembered.

Again, rather like the whites, it impresses by being well-made and just doing its thing very well, rather than through any huge variety of different flavours and aromas.

The final wine was, I thought, the best of the reds, a 2005 Côtes de Castillon from Château de Lescaneaut .

Located on the left bank of the Gironde in Bordeaux, it is Merlot-based and has fresh, ripe bramble fruit with hints of forest floor, coffee and spice. There are also touches of liquorice and mint, good acidity and at six years old, well-integrated but buzzy tannins.

Rather like the offspring of smart, wealthy, beautiful parents, this wine has everything going for it - it is at just about the right age from a good year and a solid appellation just outside St Emilion

After the party, I reflected on Hedonist's approach, business and strategy as well as the wines themselves.

On the plus side, the wines are good, well-made and enjoyable; quality is reliably even and there is a reasonable, if somewhat limited, range of generally quite classic wines.

Moreover, I am told by Angela Reddin that the market for independent wine merchants is continuing to do well in the UK.

However, retail is a tough old business and Internet retailing is tougher again.

Price point is interesting - £10 is the entry level, so Hedonist is not really competing against the likes of Naked Wines, Virgin Wines or Laithwaites - and the simplicity of the website reflects this.

With their easy-drinking, but more subtle style, the wines strike me as more sophisticated versions of everyday wines than, say, lesser versions of classic styles - that is to say, they don't score highly for the challenging intensity that perhaps appeals to wine geeks or those with a classic palate, say.

Hedonist's niche, then, is probably somewhere towards the upper end of Naked Wines - Internet savvy consumers for whom wine is a minor, rather than major, interest who want a decent bottle of wine, wherever it comes from, and who are prepared to pay over a tenner for it.

At the moment, however, I suspect that a lot of sales come via word of mouth (the website is fairly static and unlikely to come out highly in any searches) so it feels like there are still a few bits and pieces to be added to the offering before the business really stands ready to take off and become more than just a self-sustaining hobby.

As noted, quality is reliably even, but for me the most interesting white was the white Rioja, Caecus Verderón 2010, £10 whilst the best red was the Côtes de Castillon Château de Lescaneaut 2005, £10.