The IWC Taste of Gold‏ Event

The other week I got to go to the IWC's Taste of Gold event at Lord's Cricket Ground in London.

My ticket was provided by Naked Wines who were after recommendations from people "like myself" so that they can go out and approach the producers of the popular wines.

Naked don't generally make a fuss about wine awards on their website, preferring instead to focus on customer feedback and ratings, but a quick trawl through their list reveals at least a few with various nods and I will be writing up the ones I liked over time.

However, with only an hour or so there and a couple of hundred gold-medal wines to try, I had to be fairly focused and so I limited myself to a few areas of particular interest which I will write up in depth later.

Whilst most wine regions were reasonably well represented, there were a few curious curve balls - an English still rosé and a Pinot Noir sparkler, a Croatian wine and a whole raft of Japanese wines that I simply did not have time to get round to.

Part-way through, the assembled crowd of punters (the trade event had been earlier in the day) was addressed by head of the IWC Charles Metcalfe who explained a little about how the judging process works, starting with thousands of different wines and ending with just a few hundred gold medal winners (plus bronzes and silvers in greater quantities). 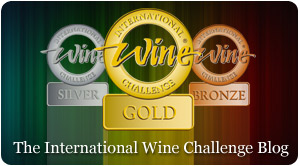 Beyond gold medals, there are also trophies for the best-in-class wines and these were announced a few days after the Taste of Gold event. Trophies are awarded to the wines that the judges deem to be the creme de la creme of the wines entered.

What I thought was most interesting about Charles' speech was his encouragement to people to seek out the gold medal wines when buying.

Most so-called "ordinary" wine buyers whom I ask about this admit to being a bit confused and mainly to buying simply what's on special offer at the supermarket. As a result of this, we are witnessing something of a "race to the bottom" in terms of price and quality of many supermarket wines.

Wine writer Wink Lorch posted an acknowledged "rant" on this subject on Facebook recently (here) and drew many comments from wine writers and critics on the subject, myself included.

Most (again so-called) "ordinary" wine buyers I know also admit to not knowing too much about wine or where to start - hence, in part, the tendency to buy whatever catches your eye as a special offer.

The key point in Charles' speech - one that I hope we will see developed as a full marketing campaign - is that the IWC provides a benchmark or standard of quality that consumers can use to seek out the best wines, rather than merely looking for what has been (arbitrarily) reduced in price.

If you have ever looked behind the shelf tag of a heavily-discounted wine, you may well notice the small print saying that it was actually only sold in a few stores at the higher price for a short while and so the purported discount is, at best, somewhat questionable.

But, with a huge range of grape varieties and countries to pick from, is it any real wonder that people seek to simplify this dizzying profusion of choice and focus on the thing they know - price ?

After all, there is a saying that you can't manage what you can't measure and, for the consumer, price is perhaps the most objective and most easily measured aspect of an unfamiliar bottle of wine - even if not the best way to assess either its quality or the amount of enjoyment to be had from it.

However, like many other wine writers, I find it rather sad that as a nation we focus more on price than quality - but how do we define and objectively rate quality ?

A little wine education helps but, in the real world, most people just want a decent bottle of wine to drink that they can buy from somewhere convenient.

The fact that we have so many supermarkets selling wine and - Cambridge aside - so few independent wine merchants is a telling indication that, as a nation, we value convenience and low prices more than genuinely interesting wines.

This is where the IWC's medals system has huge potential - it gives the UK's wine industry a broad quality standard which can be presented to consumers as a way to cut through the confusion of too many wines to choose from.

Instead of saying "I'll spend a fiver at xx supermarket", the consumer can now decide "I'll look for a Gold Medal wine from xx country / grape variety".

It may well, of course, cost a bit more than a fiver to buy such a wine, but probably not much much more than that £5 bottle when bought at a restaurant.

And in any case, we need to accept that wine at or even under a fiver is likely to be pretty basic and that quality increases significantly in the £6 - £12 range.

The IWC is of course not the only wine competition in the UK, let alone worldwide, and there are varying degrees of award from bronze to multiple trophy-winners.

As I wrote some time ago, competitions had a bit of a bad press a few years back due to some theorists suggesting that they were little more than a money-making exercise for everyone but the consumer. However, even a cursory look at the number of MWs as judges on the IWC tells you something about the quality of the judging.

And by focusing on the Golds, the IWC can hit the sweet spot in terms of quality (high), price (still affordable) and range (still fairly broad).

It would be great to see a really focused and high level campaign encouraging consumers to ask for and seek out Gold-medal wines - it could really turn us into a nation of wine appreciators rather than merely quaffers.

I really hope the budget to get the message out there is found - it could reinvigorate the UK wine trade if consumers decide that quality and not price should guide their purchasing decisions.

We are lucky in Cambridge to have several independent wine merchants and don't necessarily need the assistance of an IWC Gold medal when there are knowledgeable staff on hand, but for those less fortunate for whom the supermarket (or the internet) is the reality or only option, then the IWC Gold Medal could be the way forward.

To achieve this, the IWC needs recognition of its award as a brand and also for people to understand the different levels of award and what they mean.

The IWC, therefore, needs to do some brand-building of its own so that it becomes something the general public can put its trust in and know what to expect in return.

Gaining the public's trust as a brand is not easily done - it requires adept communications, consistency of message and a significant ongoing budget. No mean feat, then but achievable if there is a will.

However, the real challenge, I believe, is the issue of consistency. If you think of the great global brands - Coca-Cola, BMW and Microsoft, to name just a few of my favourites - they are all extremely reliable and consistent in what they do and stand for.

Wine by definition is not consistent - a bottle changes over time, a GV grown on granite is more minerally than one grown on loam, an oaked Chardonnay is very different from an unoaked one.

Variety is, for an enthusiast, part of the enjoyment of wine; but this variety is also a lack of consistency and so the message from the IWC will have to be clear: not all Golds taste the same. You may not like all Golds equally.You will need to be a little open-minded.

It also requires some honesty, or at least openness from retailers - just saying "award-winning" will not do, as an expensive wine with a mere commendation (the lowest level below bronze) could lead to serious consumer disappointment as happened to me with a very ordinary but not cheap Sancerre from Laithwaites (here).

So, there is a job to be done to educate the great British public, build a brand for the IWC and the Institute of Masters of Wine whose members judge at this and other competitions, but this is surely a great start.

Naked Wines does not yet stock any IWC Golds, but I asked Cambridge's independents for their top IWC Gold Medal wine and here is what they came back with:

Sainsbury's have two Taste The Difference 12 Year Old sweet sherries - an Oloroso and a sticky Pedro Ximénez, both £7.99 for 50cl (the Oloroso is reviewed here)

The Co-op has its own-brand "Les Pionniers" Vintage Champagne, £22.99.