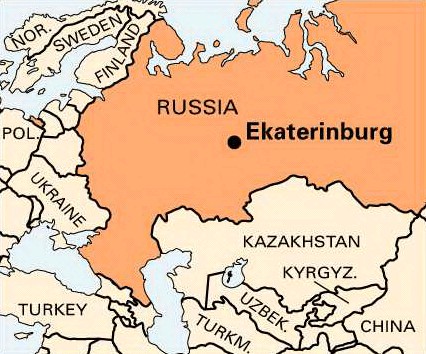 I had studied Greek, Latin and French at school and, needing a new challenge, opted for Russian at University.

The city I went to was in the Ural mountains, on the edge of Siberia, and had been closed to foreigners until the previous year due to the large number of military installations there - named after Empress Catherine I, in 1917 it witnessed the post-revolutionary murder of Russia's Imperial family who had ruled for over 300 years and under Stalin's influence grew to a city of over a million people with numerous metal bashing factories and military installations.

Nearby attractions include the scene of a nuclear incident in 1957 and sundry military cities so secret they neither had a name nor appeared on any maps, such was the level of secrecy and fear at the time.

If it seems laughably quaint, or even downright bonkers these days, just remember that this is the country that was invaded by Napoleon in the 19th century and by Germany (twice) in the 20th and suffered huge losses resisting and ultimately defeating those attacks.

At the time of my visit, the stultifying system of censorship and propaganda was being dismantled at an alarming rate with some ostensible efforts to reform the economy that achieved far less than the political reforms.

Having been brought up on a cold war diet of Russians as the dour enemy, I was surprised to find them light-hearted, humorous and very hospitable; they do not have the climate for the outdoors culture of Mediterraneans, but they do have the sociable, family-oriented outlook that treats life events such as birthdays and weddings as an excuse to get as many family and friends together as possible for large amounts of eating and drinking.

Russian food is hearty and calorific, as befits a poor country with a short growing season where many adults are just one generation away from peasantry and themselves own a small allotment (ogorod) for growing fruit and vegetables.

It is a place of dark taiga forests, wide rivers, wolves and superstition.

It is also a place of superlatives - the largest country in the world, it spans 9 time zones, starting at the Baltic sea in the west and stretching to, at its eastern tip, the Bering Straits where it is possible in winter (theoretically, at least) to walk across the frozen sea to the state of Alaska which was sold to the US by Russia in 1867.

I have been back to Russia many times - I lived there for a year as part of my degree on the advice of an older student who felt it had contributed to him getting a higher degree grade as a result. He is now a correspondent for the BBC whereas I, on finishing my studies, switched from languages to finance, travelled widely as a foreign-language-speaking accountant and gave up vodka in favour of wine.

Shortly after my return to the UK from that trip, then-President Gorbachev was put under house arrest in his Crimean dacha, Boris Yeltsin jumped up onto a tank to rally the forces of democracy, the White House in Moscow was shelled and the coup collapsed.

Neither Russia nor I would ever be quite the same again, but it would be almost 20 years before my past came back to haunt me.

Late last year, one of my fellow travellers had a bunch of his photos from Russia 1991 digitally scanned and put them up on Facebook - and gradually, through the power of the Internet, those of us who visited Russia then as well as those whom we visited all got back in touch with each other in a way that I could never have predicted all those years ago.

Now, less carefree than we were, but older and wiser, we have careers and families - and a bond that goes back 20 years of that brief but very intense summer visit in which we lived and laughed together with large quantities of drink, yoga lessons and saunas and not much sleep.

Trying to pick one overriding memory from the time is like choosing your favourite note from a song - I cannot isolate out any one bit apart from all the rest - and contemplating where I will be another 20 years from now seems harder than ever.

But if it's anything like the last 20 years, it won't half go quickly.