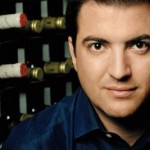 Described by award-winning Daily Mail writer Jukes as "a legend in the wine industry", Noel had selected 40 of Matthew's 100 wines to present that evening and anyone wishing to get a sense of what Australia has to offer could do much worse than turn up at one of these roadshows.

Arriving half-way through the event, I speed-tasted my way through the wines and then had a chat with Matthew to find out more about how he choose his top 100.

He does not moderate his list in any way; that is, he does not put in wines he feels "ought" to be included or add in a few worthy, but underachieving, wines to round out the list of grape varieties.

Rather, he just lists his top 100, noting that each year there ends up being a small number of fizzes and stickies, with an approximate 50:50 split for the remaining reds and whites that simply represent his personal preferences and assessment.

There is not room here to record all the wines I tried and in any case you can find the full 100 list here, but after all the tasting what struck me was that it was the varieties for which Oz is known best that generally stood out - Chardonnay, Cab and Shiraz.

I asked Matthew about his thoughts on where Australian wine is, and should be, going.

Explaining that what he admires most about Australians is their open frankness and ability not only to take criticism on the chin but also to act on it, he told me he had been invited to talk to at a marketing conference on Aussie wines not for any in-depth subject knowledge, but for his own plain-speaking no-nonsense approach.

His view is that Australia needs to continue turning away from the volume-driven supermarket turf war area and focus on its terroir and wines in the mid-range where it has huge potential - three-for-a-tenner wines, he explained, are now the preserve of South Africa, not Oz.

In short, then, Australia needs to grow up and become more serious, more European even - and whilst certain retailers' shelves may currently be awash with cheap, overly fruity and sweet Aussie plonk, this could be a final hurrah before exchange rates and rises in duty make this cease to be an attractive area for business.

He also believe that Oz's future lies in its most well-known, international varieties - he is not a fan of Spanish or Italian varieties being grown in Oz and says they usually end up being not as good as, but more expensive than, the styles they try to emulate.

However, he does believe Australian Pinot Noir is getting better all the time and is one to watch.

The full list of the wines on show that evening is here, but what follows is my condensed summary of the ones I liked.

These wines were lean and crisp in a cool-climate sort of way; not typically Australian at all.

Tyrrell's Belford Single Vineyard Semillon, Hunter Valley NSW (£N/A) 2005 had a complex but restrained nose with hints of diesel and a ripe, linear and balanced acidity.

There were a number of quite good ones here, but the Pikes Riesling, Clare Valley, SA (£15.99) 2009 showed perhaps the best overall complexity and balance between fullness, acidity and minerality.

There were two very good Chardonnays on show - but neither cheap. Both were quite pale in the glass with great complexity and structure, toasty oak and impressive finishes; Yabby Lake Vineyard, Chardonnay, Mornington Peninsula, Vic (£24.99) 2008 and Xanadu Reserve Chardonnay, Margaret River, WA (£38.95) 2008.

The two Pinots on show were pale, almost rose-like, mushroomy and pleasant enough, but I'm not sure I quite share Matthew's enthusiasm for them at this stage.

Unlike the cool-climate feel of the whites, the style here is still mainly New World - soft, smooth and full of blackcurrant fruit, with the odd more seriously-textured wine thrown in at the upper end of the price range.

Also very impressive for its texture and tannic structure was a Petaluma Coonawarra, SA (£30.75) 2007.

The "weird and wonderful reds", all lighter and more fruit-driven, were a enjoyable diversion into more affordable, everyday-drinking wines before the hedonistic delight that was the final run of Shirazes.

Full list of the wines in the Cambridge tasting - http://www.matthewjukes.com/?p=1093