A (Metaphorical) Tour Through Italy's Vineyards‏ 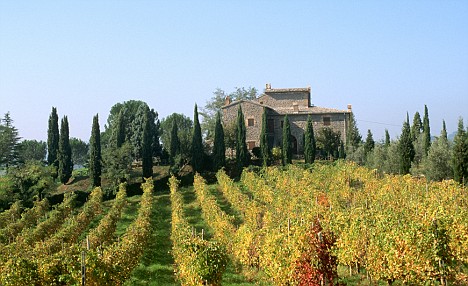 Sadly, this was not literally a tour, but rather a lot of people crammed into an ornate central London hotel conference room with around 15 Italian wine producers and importers.

Described as the 7th in a series of events, the theme here seemed to be a focus on international (i.e. French) grape varieties rather than native Italian ones.

Whilst the location was impressive, conditions were not ideal; a noisy, cramped room, the schoolboy error of not providing proper tasting glasses, scant space to jot down notes and the presence of a few over-perfumed ladies are not conducive to the wines showing their best and I only worry that I did some good wines a disservice as a result.

Having familiarised myself with native Italian grape varieties at a recent Slow Wine event, it was interesting to see what traditional French grapes can do in a warmer climate, but the results tended to be generally something a bit riper and fleshier than the corresponding French wine.

Whilst there's nothing wrong in that and all the wines were well made, given Italy's heritage of native grapes and the ubiquity of French varieties in warm-climate New World countries, it did rather leave me wondering what the point was. So, in general it was the native grapes that proved most interesting and whilst all the wines here were at least pleasant and enjoyable, a few shone through as really well made and impressive.

As usual, I started with northerly whites before working south.

A prosecco from Villa Sandi was light and fresh but well-made with a good finish; their Merlot / Cabernet Franc blend was rather lean and less impressive.

A Sauvignon Blanc from Dittajuti was fresh and full of aromatic flavours whilst also balanced and restrained, but whilst enjoyable, was rather workmanlike and did not really offer anything new.

A Sauvignon Blanc / Trebbiano blend aged in cement tanks and old oak barrels from Il Pollenza was fresh and herbaceous but also had a pleasing, ripe fatness. The Rosso, a Cabernet Sauvignon, was rich with blackcurrant, mint and eucalyptus on the palate.

The Anghels Marche Rosso, 70% Montepulciano and 30% Cab was mouthfilling and smooth, with an earthy nose of leather and bramble fruit and a good length and finish.

A traditional Vermentino, with 20% Viognier added, from Bruni proved to be perhaps the best white of the event and was the only one I went back to re-sample - aged in old barriques, it had a slightly toasty, oatmealy nose of white flowers and elderflower, and was mouthfilling and ripe with some fatness and white peach on the palate and a good finish.

The Scansano, 85% Sangiovese and 15% Syrah from 2007 was soft, smooth and harmoniously easy-drinking with some pleasing spice, cherry and vanilla on the palate.

The most interesting wine from Casanova di Neri was their Brunello from 2004 - with more age and from a better vintage it had more complexity and texture, with vanilla, berry fruit and some woodsiness on the nose and palate than the two other wines on show which felt a little like warm-up acts - a Rosso di Montalcino and a Brunello from 2005.

The Rocca di Frassinello from Castellare di Castellina was very impressive; with 18 months' aging in barriques, it is rich, ripe and mouthfilling with a grippy finish; there is spice, blackcurrant and hints of leather and woodsiness on the palate. It is made from 60% Sangiovese, 20% Cabernet Sauvignon and 20% Merlot.

Two wines from Fattoria I Collazzi which seemed to be proving popular on the day were much more in the modern, soft, fruit-driven style of quaffing wines - the Collazzi Toscana (mainly Cab, but with other Bordeaux grapes in the mix) was ripe, rich and soft with lots of fruit, whilst the Liberta (a mix of Sangiovese and Syrah) had plenty of plum and prune fruit and a soft texture.

The best reds came from two producers: two Bolgheri wines (Cab / Merlot blends) from Podere Sapaio were extremely well-made, balanced, rounded and smooth with vanilla, ripe cherry fruit and spice; the superiore from 2007 was made from a better selection of grapes with 100% new oak and was a further step-up in quality.

The Carpoli Toscana 2006 from Sada, a Bordeaux blend with mainly Cab, had a nose of spice and plums, a mouthfilling texture and impressive finish.

The Integolo (Cab, Alicante and Montepulciano, unoaked) is their everyday wine; slightly lighter it was ripe and enjoyable with good fruit and a pleasing finish.

Their white, a Vermentino, was also impressive - aromatic and fresh with a rounded feel and a good finish.

The winery of San Fabiano Calcinaia aims for depth of flavour rather than complexity and had two Chiantis to show; the riserva had a nose of woodsiness, cherry and vanilla and impressive mouthfeel. Their Cerviolo (a blend of Sangiovese and Bordeaux grapes) was full of ripe, smooth fruit.

Finally, there were two contrasting wines from Cantina Due Palme; the Canonico Negroamaro, made for European palates, had a soft texture, ripe plummy fruit and some coffee on the nose and palate.

The Primitivo, a more traditionally Italian style wine, was to me more interesting; with spice, leather and eucalyptus on the nose, it had lots of ripe, but balanced, fruit sweetness and a much more pronounced structure.

Not all the wines are currently available in the UK as some are seeking distribution.