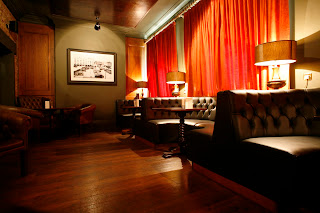 I was recently lucky enough to get a look round Cambridge's newest - in fact only - private members' club and to chat with two of the people who run it - Mark Pope (wine and front-of-house) and Leroy Rawlins (mixologist).

Opened just a few months ago, the story of how 12a Club came into being is fascinating and worth repeating - the space it occupies was formerly used as offices by the management of the Don Pasquale restaurant, a family-owned Italian restaurant based in Cambridge and catering mainly for the tourist trade wishing to eat pizzas overlooking the market square, Great St Mary's church and King's College.

As the second generation has grown up and taken a more active role in the business, they decided to update the business model, refurbishing the upstairs space into a private members club. As the pictures here show, they have done an excellent job and the interior is extremely impressive; the overriding theme is 1920s Prohibition-era America, but the bare-brick walls are very on-trend right now and the leather chairs feel like a traditional gentleman's club. 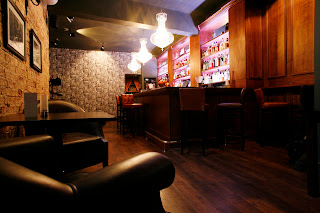 There are some clever touches too - the wine list comes "hidden" in a book (three or so pages at the back of what is otherwise a novel), just as was done in the Prohibition era, whilst the cocktail menu is included as a couple of book marks.

The club makes a virtue of necessity - when the owners originally put in their application, it was rejected by the council after lobbying by the influential Cambridge colleges. Eventually permission was granted, but with a requirement that no promotional signage be put up (hence the name, which is simply the club's address, which can be put up) and that no overt publicity be carried out with promotion to be done only by word-of-mouth.

This then ties in well with the idea of a private members club and the "hush-hush" references to prohibition era America are playful reference to that.

It also helps that Mark is well-connected from his stint at Cambridge's Alimentum restaurant and uses social media to raise the club's profile in an innovative but discreet way. For now, with the website going through the final stages of development, the club's only Internet presence is on Twitter where they have an impressive following.

As Mark explained, the club serves a purpose that no-one else in Cambridge quite offers - as a discreet, members-only club it is suitable for entertaining clients who do not wish to stand drinking pints in a rowdy student bar, business meetings or interviews.

The club is relatively large as these places go, being based on two floors with separate rooms on the upper floor which are available for groups at no extra cost. Plans for the future include extending the opening hours so that these rooms can be used during the day for company meetings with all the AV equipment needed for presentations discreetly hidden behind pictures.

The drinks list reflects the Italian origins of the owners - all the table wines are from Italy, which is something of a brave choice in an an establishment that does not yet serve food (Italian cheeses and salamis are due to be introduced shortly in one section of the club), whilst the cocktails are mainly traditional classics relying heavily on Italian vermouths and bitters.

As might be expected, it is the Champagnes and cocktails which are most popular at the moment in the absence of food, so I asked Leroy if I could try one of his cocktails - the one he chose was a Negroni, a mix of gin, sweet vermouth and Campari, mixed with ice and garnished with a squeeze of orange peel. 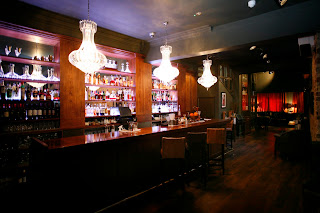 Leroy explained the origins of the cocktail - it is stronger version of the americano, using gin instead of soda water, as ordered by Count Negroni in Florence in 1919.

The cocktail equipment used at 12a is all Japanese and is designed to allow the ice to chill the drink without diluting it. In any case, the resulting cocktail had a really well-balanced refreshing bitterness with aromatic botanicals from the bitters and the orange peel, following the Italian tradition of matching simple, but strong flavours together expertly.

However, I had come to taste some wines and so we went through the list of wines wines served by the glass; they cover most of Italy from Alto Adige in the north to Sicily in the south and are from a mixture of indigenous and international varieties in showed a ranges of styles from restrained old-world, to more blowsy new world.

The first, a Fiano from Sicily - a grape which seems to be steadily gaining a reputation as possibly the Next Big Thing - was a crowd-pleaser with lots of pineapple and peach fruit acidity, good structure and balance and a great finish.

We then moved almost 1,000km north for a Sauvignon Blanc from the Venezie region - this was aromatic and restrained, more cool-climate-like, and had the lightness and focus of something from the Loire, albeit without the flinty minerality of a really good Sancerre or Touraine.

The final white was one I already knew - a Pinot Grigio from Alto Adige's Alois Lageder called "Riff" - this is what an Italian Pinot Grigio should taste like, with apples-and-pears acidity and a mineral depth that increases with a bit of age; the name is a reference to a limestone reef made of fossil deposits on which the vines are grown.

The whites may well have benefitted from being tried in reverse order, starting with the more neutral Pinot Grigio and ending with the intense fruit of the Fiano.

We then moved onto the reds, starting with a Pinot Nero / Syrah blend from Sicily; both are noble grapes, but whilst Pinot Nero (the Italian for Pinot Noir) is a thin-skinned temperate-climate grape, Syrah does best in the heat of southern France.

This unusual blend from an unusual provenence actually worked extremely well, with the cherry aromas of the Pinot and some fruitcake and spice plus texture from the Syrah. It was perhaps as close as Italian reds get to easy-quaffing, but still had enough grip on the finish to be more of a food wine.

Next we headed into traditional Italian red wine territory with a Sangiovese from Tuscany - this was a more typical wine with cherry fruit, good acidity and a grippy finish.

We finished off with a Primitivo, which is native to southern Italy, and whilst there were plenty of typical "southern" ripe fruits and spice, it also had a degree of restraint and Old-World structure.

Prices here are by the glass / bottle from the club.