Naked Wines recently invited me to a speed-tasting event, sampling around 30 speculative trade samples and new vintages from existing producers at Naked HQ after work one evening.

I was not the only outsider invited; there were also Carlos Rodriguez, one of Naked's regular winemakers who had flown in from Spain for a blending session the next day, plus a couple of journalists from Belgium.

I have reviewed a number of Naked's wines previously - either as samples or my own subsequent purchases as an Angel (see here) - but this was quite different from my usual reviewing approach of trying a wine over an evening.

For the first sample, I swirled, looked, sniffed, sampled, spat, sampled a bit more, considered and tried to think of an apt metaphor - by this point, everyone else was on wine number 2 and I quickly realised this would be a swift canter rather than a leisurely stroll.

And thinking about it, that makes perfect sense; when faced with large quantities of diverse wines to be reviewed and assessed, one is looking for broad-brush indications, not minutely-described nuances - is it a good wine overall, is it pleasant, interesting and priced sensibly ?

What was also interesting for me was to see the non-qualitative assessments that need to be made - do we already have a similar wine at a similar price in stock, is it the sort of thing that gets good reviews from our customers ? Is it a better-value alternative to a particular classic style.

As we whizzed through wine after wine, the idea of reviewing a bottle over several evenings to see how it evolves with time and air seemed quite academic and ivory-tower, almost indulgent.

When presenting at a wine-tasting event, I will typically plan on spending 10-15 minutes on a wine before moving on to the next one and even at trade shows and wine fairs there is a presenter on hand to provide a bit of background on the wine and chat in more detail, so that you don't have to rush through the wines.

Back at Naked HQ, there was simply a table with a long row of bottles to be worked through. 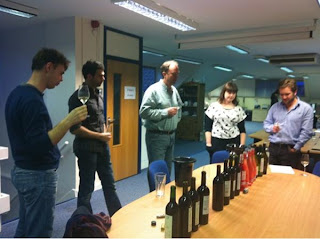 The wines had been put in a fairly logical order - lighter whites, the more aromatic ones, then the oaked before the rosés and finally reds, but they still represented quite an eclectic mixture of grape varieties and regions.

We moved too quickly for me to remember all the wines, let alone take any notes, but included were a very neutral Italian Pinot Grigio, a flowery Torrontes, three Loire rosé blends from Naked winemaker Joost de Villebois, a range of Chardonnays from one producer in Limoux and a clutch of Portuguese reds.

My first experience of speed-tasting felt a little like the difference between studying a language and speaking it; you might spend years memorising vocab and learning grammar, but visit the country itself and there is no time to think - you just have to make yourself understood, even if you get your dative plurals wrong or forget to use the subjunctive.

And so it proved at Naked HQ - you might miss out a nuance here or there, but the aim of the tasting was a quick, high-level assessment of each wine.

And moving around so many different wines was also a lesson in quickly recalling the key characteristics of each grape or region and then assessing the wine against this.

And that was a lot easier where the wine fitted, for me, into a familiar pigeon-hole - Pinot Grigio, Loire Sauvignon or oaked Chardonnay.

It was rather harder to make quick, definitive assessments of unfamiliar wine styles such as the Torrontes, the Fiano or any of the Portuguese reds.

Having a number or slightly different samples (either slightly different blends or different oakings) also helped draw out the key characteristics of each wine, noting what changed and what stayed the same from bottle to bottle; one Loire rosé blend had a slightly sweaty tang on the nose ("Heavy on the Malbec", commented Naked founder Rowan Gormley), the second seemed a little harsh on the finish whilst the third was the most balanced.

There was not time to make any notes or even record the wines - of the 30 or so we tasted, a small handful were more or less good, plenty were middling and the rest were either either not interesting or, in the odd case, not pleasant.

What I remember much more are the stories behind the wines - the newbie producer whose wine 5 years ago was undrinkable but whose latest vintage is a best-seller or the awkwardness of dealing with a charming producer with a great story to tell whose wines turn out to be actually rather unpleasant.

But more than that, Naked HQ has a sense of a business where anything is possible.

In a simple and rather plain, L-shaped open-plan office overlooking the very grand Norwich cathedral, team Naked is quietly getting on with fundamentally changing the world of wine production and retailing.

Each member of the team is experienced enough to know what they are doing, but not so long in the tooth as to be set in their ways and there is an easy-going, confident, can-do vibe.

Having worked for several large, indeed iconic, American corporates, I know what it is like to put up company logos and merchandise everywhere and get everyone pumped up about the brand right down to the cleaners.

But that's not the British way and Naked does not feel like that; the offices are actually rather plain and unadorned except for a few IWC trophies on one shelf. I was met on arrival not by a glamorous receptionist but by the IT Manager whose desk is at the top of the stairs leading into the offices.

Plain, purposeful and focused, what it particularly has is a non-hierarchical feel with no separate offices (the CEO has a corner desk, but nothing more) and the buzz of a successful and growing start-up.

Founder Rowan Gormley is ex-Virgin, having set-up both Virgin Money and Virgin Wines. Working for such an iconic and entrepreneurial company is great training for going it alone - especially when you are able to recruit some of your former colleagues to come along and help you set up and run your new venture.

The difficulties come with the next stage of growth - as the business grows, it needs more layers of management and the people you bring in may not be quite a strong and entrepreneurial as the hand-picked team you started with.

Moreover, once you achieve a certain size, your competitors start to take a much greater interest in your activities.

However, with over 45,000 people signed up as Naked Angels and contributing a regular monthly amount and constant improvements to the company's website based on feedback directly from Naked's highly engaged customer base, it looks like Naked will be just fine as long as Rowan Gormley stays in charge.