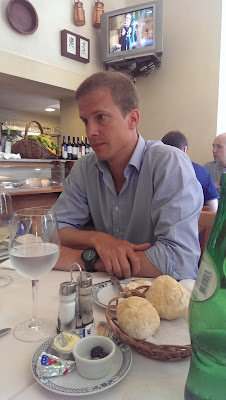 Lunch with Chris Blandy of The Blandy Group at Dos Combatentes, Funchal


Blond, tanned and handsome with a born-in-duty-free air, thirty-something Chris Blandy is CEO of the hotel, shipping and wine divisions of the Blandy family empire.

We meet for a catch-up over a lunch (which he kindly pays for) at Dos Combatentes, an authentic and unpretentious restaurant next door to the Blandy's Wine Lodge in central Funchal.

Chris orders seared squid, his usual here so I follow suit, and a bottle of Monte Da Peceguina, a crisp, modern easy-drinker from Portugal that goes perfectly with the seafood. 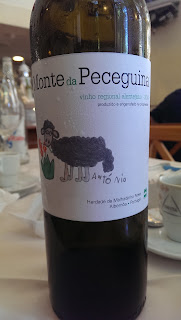 After graduation from a UK university, Chris worked in hospitality outside the family business for several years - a pre-requisite to any senior position in the Blandy Group in order to bring in some independence of thought.

He has gradually taken on more responsibilities within the company and tells me that the wine side of the business is the smallest financially but where his emotional interest lies.

Madeira - once the wine of kings and conquest, victories and celebrations - is now little more than a footnote in the public consciousness of fortified wine. Blandy's is the largest producer of Madeira and Chris does not see the wine as ever regaining its former position; there is not the volume of vineyards and getting there would be too expensive, so he focuses instead on developing Madeira as a niche, hand-sold product, on pricing rather than volume.

This makes sense not just from a financial perspective but also because the canteiro process means that Madeira is indestructible and will last forever, so it is relatively easy to sit on stocks going up in value without the pressure to sell before they are past their peak.

Chris is the seventh-generation CEO of a family company that goes back 200 years; his father now runs a separate holiday rental company after developing the Palheiro Estate and his uncle is in overall charge.

The Blandy's were originally English, but Chris' ancestry now includes the US and South Africa and he is the first of the family to marry a local. He has a global outlook, citing such tourism megatrends as safety and the effect of the Arab spring on Madeira as a safe-haven destination.

His second megatrend is the demand for authenticity, a complete local experience of food, drink and culture; while this provides a synergy between the hotels and wine businesses, it is something of a challenge (or opportunity, depending on how you view it) for the island of Madeira which imports the vast majority of all its food.

If the food and drink on Madeira is surprisingly inexpensive, this is because it is subsidised heavily by Portugal and the EU. This also explains the lack of fresh milk on the island; it is all UHT shipped from Portugal. Even the sand on one of Madeira's few sandy beaches had to be shipped in by boat.

At Chris's recommendation, we later go to a restaurant on the far side of the island which is reviving local traditions - at Quinta Do Furao we sample the Madeiran menu (including limpets, a first for me) with a local table wine, Terras do Avo.

My experience of various parts of the Blandy's empire reveals that they have an attention to detail and a long-termism: the Palheiro Estate where we are staying has American levels of customer service, neat cleanliness and friendliness; the Blandy's Wine Lodge Tour is thorough and well-rehearsed, but has a humanity that never becomes too corporate or slick.
Other related articles
Madeira - A Guide
Terras Do Avo
Blandy's Wine Lodge Tasting