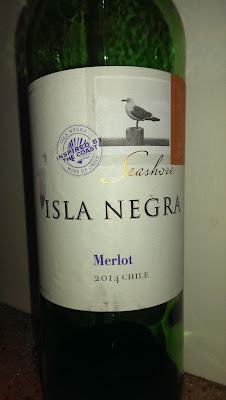 Jack: If they want to drink Merlot, we're drinking Merlot.
Miles Raymond: No, if anyone orders Merlot, I'm leaving. I am NOT drinking any [... ] Merlot!

My first encounters with Merlot were as a component of Bordeaux wines, so I never quite got that line in the film, taking it merely to be an idiosyncratic opinion rather than a value judgement.

With wider experience, I have learned that Merlot is the pop of red wine to Cabernet's rock and Pinot's orchestral.

Basic New World Merlot is the Boy Band of wine grapes - inoffensive and often rather unsophisticated, it has wide rather than deep appeal and divides opinion as widely as everyone from One Direction to The Bay City Rollers.

If occasional examples have the charisma of Robbie Williams or Marc Bolan it is only on the Right Bank of the Gironde that it develops into something closer to The Beatles.

Underwhelming rather than disappointing, this has pleasant-enough fruit, oak and acidity. But it is one-dimensional - a catchy-ish chorus and boy-meets-girl narrative - but otherwise forgettable.