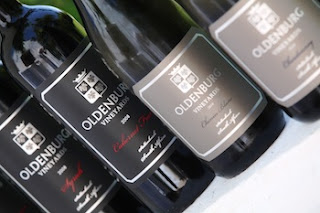 If South Africa's Oldenburg Vineyards were a person, it would be Grace Jones - the multi-talented, transatlantic, edgy, androgynous Jamaican-born diva. 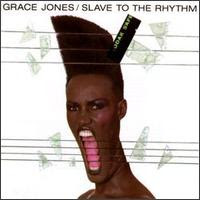 It's not as if Oldenburg owner Adrian Vanderspuy bears any resemblance to the singer, model and muse.

But, like Jones, he is a polymath global citizen - born in South Africa, he spent time in Asia, the US and Europe working for an investment bank before settling in Switzerland and deciding to establish a winery in his homeland.

His wines, mostly from international grape varieties, have a warmth and ripeness that is New World, but an elegance, precision and food friendliness that is European - like Jones, they are naturally beautiful, but have a touch of edgy, angular linearity to them.

They are soft and welcoming, yet also muscular and lithe, big yet deft, internationally recognisable and yet with their own particular style.

They are also very good. 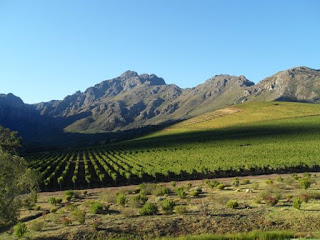 The vineyards are actually on land that was Adrian's grandmother's farm, but were held by a trust that was not so much interested in making wine, as in merely preserving its assets. A study of soil samples revealed, in his words, that he'd be mad not to go ahead but it still it took five years and the gradual relocation of 120 people to achieve it.

The existing vines on the farm were all replanted - there was leaf roll and row direction was wrong for the tempering effects of the winds that come off ocean, over mountains and drop down and to cool the vines.

The final pieces of the terroir jigsaw are altitude and aspect; the vines are at around 300m - 450m, keeping average temperatures a couple of degrees cooler than down in the valley, but also with lots of exposure to the sun. Adrian likens the meso-climate to New Zealand, whereas a few kilometres further inland it is more like Australia.

With no particular role model or style in mind, he selected a winemaker, Simon Thompson, who shares his focus on viticulture over vinification, whilst "research" on styles consists Adrian bringing back various bottles he likes from Europe and sampling them with Simon. 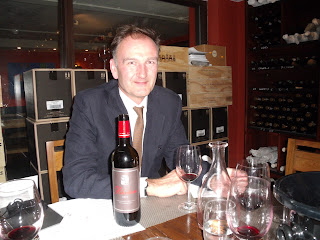 In person, Adrian is very impressive - he has a purposefulness and clarity of vision that come from years spent in a senior management role. Yet he is also very affable in a way that you might not expect from a banker, so it was a very pleasant evening chatting with him over dinner at High Timber.

On South African politics, he believes in Black Empowerment - but by developing the business into a successful enterprise rather than by, say, giving the land away to the black community and concedes most of the senior level positions are held by whites; he does not see spill-over from Zimbabwe as a potential risk and feels South Africa is stable.

His key markets for sales and tourism are Switzerland ("visiting South Africa is a walk on the wild side for the Swiss") and Germany as well as the UK - much less so for the Netherlands, despite a broadly shared language / cultural heritage.

These are all young vines - just a few years old - so it was not surprising that the newer wines generally showed better. They were served with a dinner:

Ham hock croquette this was lovely but being deep fried, rather overpowered the wine
White truffle risotto creamy, al dente, lovely musky flavours, good match with the oaky chardies
Rib of beef, broccoli and feta meltingly tender meat, full of flavour and well-matched with the reds
Cheese plate comte and morbillon, perfectly served, but not a great match with red wine

The vineyard does not grow Sauvignon Blanc as Adrian foresaw a world glut in 2004 (one of his best calls, he says), and we started with the oaked Chenin Blanc - a grape variety I have historically struggled with.

Chenin Blanc 2012 50% new French oak 8-9m; lots of floral / herbaceous Chenin character on first pouring, lovely balance of judicious oak and Chenin sharpness. Ripe fruit and florality, precise acidity - pure and focused, elegant. Feels rounded and very pleasing. Elegant and balanced on the finish, feels quite old world, really lovely. Approachable now, it has has another 3-5 years in it according to Adrian.

Chardonnay 2012 made from all blocks, toasty, musky - more oak; vines are older and can cope with more oak. Bigger, more complex Bottled in December 2012, so will benefit from some further age.

Rhodium 2010 - the name of this wine is worth a mention; 95% of the world's Rhodium is from South Africa and it is used in exhaust systems to clean air, so has a symbolic meaning. It is not, however, to be confused with Rhenium, a funk album with the track "I Call My Baby Pussycat".

50% Merlot, 40% Cab Franc, 10% Malbec - it is an elegant, and not ostentatious wine; there is prominent ripe & sweet vanilla, a very new world feel, soft texture and savouriness; beautifully structured, taut but approachable with a spicy pepperiness.

Louise Hill, who had organised the evening, suggested the analogy for this wine should be Halle Berry - dark yet pale, spicily exotic and seductive, yet also linear with a hint of androgyny.