Love Thy Neighbour ? A Sad Tale From Domaine Jones

Katie Jones is a British expat living in Paziols, Languedoc and making wine as Domaine Jones.

I know Katie vaguely, having chatted with her by email and twitter, but have not managed to get to any of the tastings where she has been showing her wines - however she has won a number of awards and accolades; her Domaine Jones Blanc 2009 and Rouge 2009 both have Silver medals from the International Wine Challenge 2011.

More impressively, her 2010 Fitou was rated by Parker 92/100 and was a gold medal winner at the International Wine Challenge.

She and I both went to the same school in the Midlands, where I knew a Katie Jones; however, that turns out to have been a completely different person.

Katie moved to the Languedoc in 1993 to make Fitou, "my favourite red wine from the Languedoc", and bought a small vineyard in the village of Tuchan - with a breathtaking view thrown in.

Last weekend, whilst Katie was in Germany showing her wines at the Prowein fair, somebody broke into her winery and, in an act of sabotage, opened the taps on her tanks of Domaine Jones Blanc - it was just a couple of weeks away from bottling.

The news went round twitter and there were floods of commiserations and a stoic shrug resignation from Katie - one of the inconveniences of living in a small French village, she tweeted.

But you can't run a business on good wishes and the wine formerly in tanks and now somewhere in the aether via the winery floor would have represented an important cash inflow for Domaine Jones that will now not be realised.

So, if you want to help out an independent winemaker in a time of need, why not buy some of these award-winning wines this weekend ?

Buyers in the UK can order directly - http://shop.domainejones.com/ or from The Wine Society and Fareham Wine.

Minimum order from the website is 1 case delivered to the UK costing around £100 (depending on exact contents) plus £5 delivery or free delivery for orders over £250. 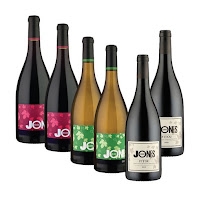 Email ThisBlogThis!Share to TwitterShare to FacebookShare to Pinterest
Labels: France, General / other, Languedoc