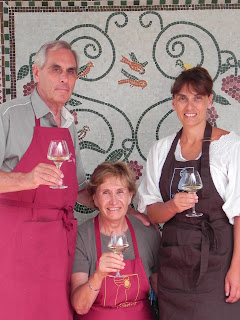 I've been following the developments of the organic, almost natural wines of Tour de Belfort from South West France ever since I met Muriel Lismonde in her adoptive home of Cheshire earlier this year.

One evening last week, I got an early train home from work and stopped by The Gonville Hotel overlooking Parker's Piece to catch up with Muriel and meet her parents, Eugene and Sylvie, who were showing their latest vintages.

Having struggled to get distribution in the UK, they decided to broaden their range and now have a shop offering wine and food courses with local chef Jason Palin.

To the basic red, white and rose blends, they have  added two colours of fizz and two oak-aged, single varietal Grands Vins. 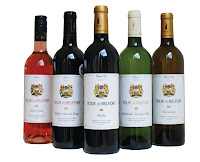 I started with a Crémant de Bordeaux; this unusual wine is made from Bordelais grapes using the Champagne method. The family who make it originally came to Bordeaux from Champagne bringing their wine-making approach with them.

The current release does not use Tour de Belfort grapes, but simply has their name on the label - the first of the genuine Tour de Belfort Crémant de Bordeaux will be available from next year using this year's harvest.

The white fizz was light, crisp and fresh - similar to a good Prosecco.

The pink fizz was rather more interesting with good aromatics and some spice.

This year, the white blend features a higher proportion of Chardonnay. It feels as clean and pure as the 2010 with ripe melon and tropical citrus on the palate.

The rosé, made from young-vine Syrah and Malbec, is the most well-defined of the three with crisp, linear acidity and aromatic spice.

The varietal Malbec is aged in 100% new oak and this shows through in the extra complexity and spice. An accomplished and sophisticated wine.

The oak-aged Chardonnay has ripe, pure tropical fruit and lovely oaking with sweet vanilla spice. It's expertly made but stylistically more New World - and specifically Californian - than European; I'd prefer to see a streak of linear acidity and a hint of pungent yeastiness to balance out the ripe sweetness.

The Tour de Belfort range is available from the website. However readers of this blog can get a discount on the list price by contacting Muriel directly and mentioning the blog.

The wines are also available in Cambridge exclusively at The Gonville Hotel.

Recommended Wines
For me, the most interesting wines were the rosé for its linearity and precision and the oaked Malbec for its complexity.